In the seventeenth century, Antonie van Leeuwenhoek and Robert Hooke made dramatic improvements in microscopes. Their work brought about many fundamental discoveries. Both men documented the existence of cells, one of the most significant observations in the history of science. But Hooke and van Leeuwenhoek didn't get much further than that. Why didn't they discover organelles, proteins, or atoms?

Two things are required to visualize something with a microscope: resolution and contrast. Resolution is a measure of the finest detail that can be seen through an optical system. Alone, resolution is insufficient to make something visible. There must also be contrast — some kind of difference between the thing you want to see and whatever else makes up the rest of the sample.

Hooke and van Leeuwenhoek couldn't see things much smaller than cells because their microscopes had very bad optical aberrations. Aberrations are technical shortcomings that distort images made by optical systems. Over the intervening three and a half centuries, engineers developed clever designs that reduce optical aberrations to arbitrarily small levels (in some cases, at arbitrarily large price points).

Even assuming that all the aberrations had been eliminated from their microscopes, though, the early microscopists still would not have glimpsed a protein molecule or an atom. In the ray tracing model, rays passing through a lens come together at a point in the image plane. In actuality, light passing through an aperture undergoes a modification called diffraction that spreads the point predicted by the ray model into a disk of light. This spreading causes points of light to intrude on their neighbors, blurring the image.

This page explains how diffraction affects light, the quantitative definition of resolution, how to calculate the theoretical resolution of a microscope, and some methods for generating contrast.

To ray optics, or geometrical optics, that provide intuition and equations to account for reflection and refraction and for imaging with mirrors and lenses, we can add the concepts of wave optics, also dubbed physical optics, and thereby grasp phenomena including interferences, diffraction, and polarization.

Profiles of the transverse electric and magnetic fields of a light wave at an instant of time.

Key results from the theory of interactions of wave lights are:

The (vector) electric and magnetic fields from each source of an electromagnetic wave add.

As a wavefront propagates, each point on the wavefront acts as a point source of secondary spherical light waves. 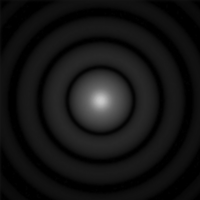 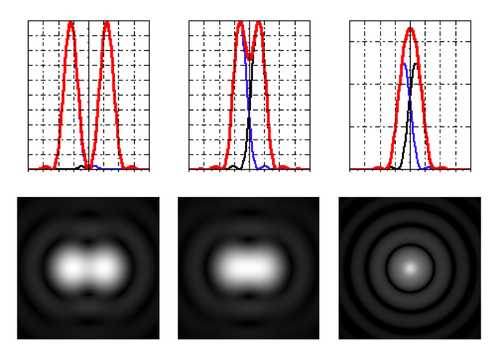 Optical microscopy, involving visible light either transmitted through or reflected by the sample, is fettered by three categories of limitations:

To overcome these limitations, several specific microscopy techniques have been developed. Good overviews can be found at zeiss.com [1] and fsu.edu [2] (where the figures in this section were taken from) if you're interested in learning more.

Fluorescence microscopy has greatly contributed to our understanding of biological systems over the past few decades, as forays were made in parallel in molecular probe development and imaging techniques. Fluorescence has enabled researchers

The principle of fluorescence imaging consists in illuminating fluorophores with a specific wavelength (or narrow range of wavelengths) which they absorb, causing them in turn to emit light of longer wavelengths. Fluorophore electrons indeed get excited by the photonic energy of incident light from their ground state to higher singlet excited states, before relaxing down to the ground state, thereby releasing photonic energy in the form of red-shifted light.

In any fluorescence system, a key concern is viewing only the emitted fluorescence photons, and eliminating any background light, especially from the illumination source. Two optical elements address the problem.

Keep in mind the following points as you opt for a fluorescence imaging approach: