Considerations in choosing a lens

In practice, as the polychromatic nature of white light is taken into consideration, and as imaging conditions depart from the Gaussian optics approximations that have framed our representations so far, optical aberrations get introduced into images formed by lenses. Aberrations fall into two main categories: aberrations caused by wavelength variations (chromatic), and aberrations caused by the lens's spherical construction (these are known as Seidel's aberrations: spherical, coma, astigmatism, field curvature, and distortion) [1]. 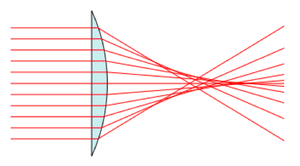 In coma and astigmatism, parallel off-axis oblique rays do not focus at one point in the image plane, but rather at distinct points in the sagittal and meridional planes, causing image distortion. 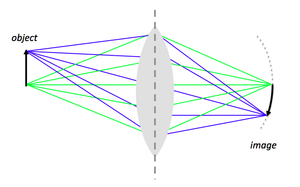