This page contains data from the demo I did in lecture on 9/22/2015 of the Manta. The point of the demo was to measure the gain $ g $, dark current $ i_d $, and read noise $ N_r $ of the Manta G032 cameras we use in the microscopy lab. Note that I showed a linear plot in lecture and the plot below is log-log. 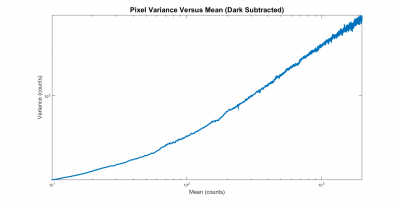 The value of a particular pixel over a certain time interval, $ P_{x,y}[t] $, is equal to the sum of the number of photoelectrons and the number of dark electrons counted during that interval plus the number of electrons gained or lost due to read noise, times the gain $ g $. (The square brackets indicate that $ P_{x,y} $ is evaluated at discrete time points.) Mathematically:

The next step is to write an expression for the mean value of each pixel. Means of terms in a sum add, so $ \langle (P_{x,y}) \rangle $ can be found by summing the means of the three individual terms. The mean value of read noise is zero, and the mean value of dark current is $ i_d \delta t $, which gives:

We subtracted the average dark frame to remove $ i_d \delta t $, so the value plotted on the horizontal axis is just $ g\left(\langle I_{x,y}\rangle \right) $. Cool.

Now we need an expression for the noise. Variances of a sum of terms also add, so $ \operatorname{Var}(P_{x,y}) $ can be found by summing the variances of the three individual terms. The photoelectron count, $ I_{x,y} $, is Poisson distributed, so its variance is equal to its mean: $ \operatorname{Var}(I_{x,y})=\langle I_{x,y} \rangle $. The second term has a constant variance that is a property of the camera, the read noise $ N_r $. The third term is also Poisson distributed, with an average value of $ i_d \delta t $, where $ \delta t $ is the exposure time. This gives:

The x-intercept is equal to read noise plus dark noise times $ g $. The slope of the line is equal to $ g $.

The intercept is around 15 counts, meaning that dark plus read noise is about $ \sqrt{15}=3.9 $ counts, or about 13 electrons at this (short) exposure time.

I took another dataset with a 1 second exposure so we can to figure out the relative contributions of dark and read noise. I will post soon.

For comparison, the Orca Flash 4.0 scientific CMOS camera has a read noise of 1.6 electrons and a dark current of 0.06 electrons per second (with air cooling). The Flash 4.0 cools its detector to achieve such a low dark current. The camera also provides a slow-readout mode in which the read noise is reduced to 1.4 electrons. The gain of the Flash 4.0 is 2.