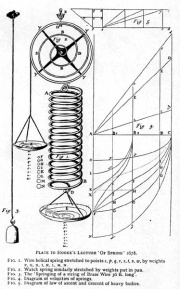 The Power of any Spring is in the same proportion with the Tension thereof: That is, if one power stretch or bend it one space, two will bend it two, and three will bend it three, and so forward. Now as the Theory is very short, so the way of trying it is very easy ... it is very evident that…in every springing body…the force or power thereof to restore it self to its natural position is always proportionate to the Distance or space it is removed therefrom.

Understanding how fishes generate external fluid force to swim steadily and maneuver has proven to be difficult because water does not provide a stable platform for force measurement.

Atomic force microscopy and optical trapping are key techniques for investigating forces in biological systems at cellular and molecular levels. Both instruments can exert and measure forces on submicron-scale particles. This capability offers a unique and valuable tool for manipulating and measuring cell components at the single molecule level. For example, optical traps have been used extensively to investigate the mechanical properties of biological polymers and the force generation mechanisms of molecular motors. In many studies, optical tweezers apply force to functionalized microspheres, which act as convenient handles attached to molecules of interest.

To make quantitative force measurements, AFMs and optical traps record displacement of objects being measured versus time. For small displacements, the exerted force is very nearly proportional to displacement. The force/displacement relationship is modeled by Hooke's law: F = -αx, where α is the spring constant. The detector produces a voltage proportional to displacement. The constant of proportionality that converts voltage to distance is called the responsivity of the instrument and denoted by the letter R. Both α and R must be found through a process called calibration. Accurate force and position measurements depend on careful calibration of R and α. On the AFM, α is a function of the cantilever geometry. The optical trap's stiffness depends on trapping laser power, bead size, bead composition, and optical properties of the sample.

In this lab, you will investigate the limits of force detection using AFM and optical traps. You must attend a one-hour lab session during which an instructor will help you take data. You will analyze the data to determine α and R, and you will calculate the minimum detectable force, δ, for both instruments. 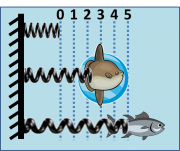 Fish-o-Meter apparatus for measuring the swimming force of ocean sunfishes versus tuna. A linear spring is harnessed to the fish. The zero point is marked with no fish attached. Swimming force is proportional the extension of the spring.

Fish are incredibly cool[1]. Many species, like the Atlantic bluefin tuna, are sleek, high-speed swimming machines with hydrodynamic lines and powerful bodies, while others like the ocean sunfish are preposterous assemblages of parts that could easily be mistaken for a square, flat boulder with fins, eyes, and comical lips glued on — or even a sea monstah[2] Because sunfishes are so ridiculous, for a long time they were thought to be weak swimmers with little control over their destinies — essentially gigantic pieces of plankton at the mercy of the tides. How could a creature with such a ludicrous swimming stroke possibly navigate the open ocean? But recent research suggests that sunfish are actually pretty good at getting where they want to go.

If you wanted to study how the force generated by the sunfishes' ridiculous fluttering motion compares to the powerful and athletic wriggle of the mighty tuna, you might construct an instrument like the Fish-o-Meter shown at right. One of the most common ways to measure force is to attach the force generator to a spring. The constitutive equation for deformation of a spring is $ f=-\alpha x $, where $ f $ is the force, $ \alpha $ is a constant of proportionality called the spring constant, and $ x $ is the displacement of the spring from its natural length. The negative sign indicates that a spring's restoring force acts in the opposite direction of the applied force. Even though this simple, linear model clearly does not capture all the nuances of a spring's behavior, it's a very good approximation in most cases so long as long as magnitude of the spring's deformation is smaller than a certain threshold. (The threshold depends on how the spring is made.) The Fish-o-Meter is an indirect measuring device. It exploits the spring as a force-to-distance converter. Distance can be measured directly. Force is calculated from the raw instrument reading using Hooke's law as the measurement model. The more the spring stretches, the greater the force.

Building a Fish-o-Meter would entail solving a many practical problems. First off, McMaster Carr lists thousands of springs for sale. Which one should you choose? (Maybe one of the spring assortments? Fish are all slimy and wriggly[3], so you would have to devise some clever way of attaching the fish to the spring. (It would be difficult to come up with an arrangement that didn't interfere with the fishes' swimming motion. In any case, the spring would pull back on the fish and eventually stop its motion, which might have a significant effect on its swimming.) And it would be challenging to read the Fish-o-Meter because the force generated by a swimming fish is not constant. Perhaps you could add an underwater strip chart recorder to the setup.

The AFM and the optical trap can both be modeled by a linear system with a mass, spring, and damper in parallel, as shown in the figure below. (The elements all have the same velocity, so they are connected in parallel.) In the AFM, the restoring forceAir or water molecules collide with the cantilever or trapped particle, which drives the system with white noise.

The transfer function of the circuit model is:

The calibration methods are summarized below: