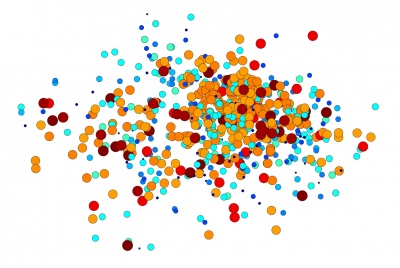 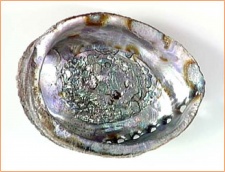 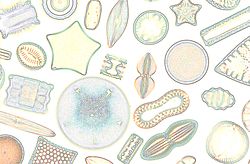 The accomplishments of the natural world can inspire us to great engineering feats. Biomineralization is one particularly impressive trick nature pulls off. Vertebrates, invertebrates and plants all have ways to precisely position inorganic substrates into crystalline order. For example, calcium carbonate will form unstructured dust in the absence of genetically-programmed organizers, but the same material can be made into the hard and luminous shells of sea creatures. Similarly, diatoms organize silicon dioxide into intricate patterns that manufacturers of electronic components can���t begin to approach. In one more instance, bacteria align iron inside their cytoplasm to form magnetic rods on the submicron scale. These feats are accomplished without harsh chemicals, without extreme temperatures, and without noxious wastes that poison the nests of the organisms themselves. Humans have a lot to learn from nature���s successes. In the upcoming weeks we���ll use a virus that infects bacteria, namely the bacteriophage M13, and we'll rely on the self-assembling coat of this virus to template carbon nanotubes or gold nanoparticles and TiO2. The interaction of these materials with a protein on the phage coat yields nanoscale-particles with useful energetic properties, as we���ll see.

M13 bacteriophage is a member of the filamentous phage family. This well studied phage is roughly 880 nm long, has a diameter of about 6.5 nm, and a mass of approximately 16.3 MDa. Of this mass, 87% is accounted for by the structural coat proteins which encase the single stranded DNA genome of about 6.4 kb. The M13 genome encodes 11 proteins, five of which compose the phage���s protein coat and six of which are involved in phage maturation inside its E. coli host. The phage coat is primarily assembled from a 50 amino acid protein called pVIII (or p8), which is sensibly enough encoded by gene VIII (or g8) in the phage genome. For a wild type M13, there are approximately 2,700 copies of p8 which pack together to build the majority of the ~880 nm long coat. The coat's dimensions are flexible though and the number of p8 copies adjusts to accommodate the size of the single stranded genome it packages. In contrast, there are typically only about five copies of each of the other four coat proteins, located at opposite ends of the mature virion. Of note, pIII (or p3) is a 406 amino acid protein found at one end of the phage, and is responsible for recognizing the host E. coli. From a biological engineering perspective, this bacteriophage provides an efficient and modular platform allowing for either random or specific genetic alterations of the phage DNA to be related to phenotypic changes of the phage surface. For example, genetically encoded fusions to the surface coat proteins can be used to display peptides with the ability to bind materials with which the wild type phage would normally not interact. 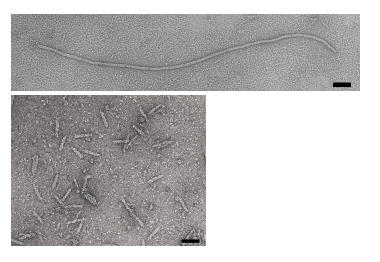 The general stages to a viral life cycle are: infection, replication of the viral genome, assembly of new viral particles and then release of the progeny particles from the host. Filamentous phages use a protein at their tip, namely p3, to contact a bacterial structure known as the F pilus to infect E. coli. Through mechanisms which are not fully elucidated, the phage genome is then translocated into the cytoplasm of the bacteria where resident proteins convert the single stranded DNA genome to a double stranded replicative form (RF). This DNA then serves as a template for expression of the phage genes and produces new phage particles that shed off the surface of the infected cell. While other phage are known to lyse their host cells, M13 and E. coli co-exist in a balanced way, allowing the growth of both host and virus, although the infection does slow down the doubling time of the E. coli, causing plaques to form in a bacterial lawn. 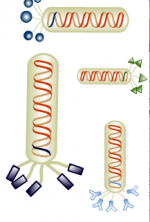 phage display
Phage display has been used for decades as a tool for discovery. This technique exploits natural selection and identifies functional peptide sequences that can be fused to the phage coat. Fusions are usually added to either p3 or p8, with p3 accommodating larger peptides and p8 providing higher valency, in general. A library of genetic sequences encoding random peptides can be synthesized and cloned into the M13 genome; in this way a pool of phage each with different peptide fusions can be made. Finally, the phage pool can be screened for interesting behaviors or properties. Peptide-fusion proteins to p8 or p3 that include stop codons or intolerable sequences are largely lost from the population after the first round of ���panning.��� Other phage that can bind to a substance of interest or show enzyme activity or glow green���, these remain and can be directly isolated from the pool or further enriched by a second, third, fourth round of panning. Ultimately anywhere from 10 to 1000 candidate sequences may remain from a starting pool of 1 billion [2].

Despite phage display techniques being available for more than a generation, this tool has been applied only recently to the search for novel materials. Largely it���s been Angela Belcher and her lab who highlighted and then demonstrated the usefulness of this search tool for finding peptides that interact with materials to meet human needs. That M13 could interact with inorganic materials could not have been predicted from the original genetic studies on the phage, but there was also no one who had tried it. Phage that can bind to cobalt oxide, gold, iridium and indium tin oxide are all in-hand thanks to their work (e.g see reference [3]). Today you will harvest phage that can bind to gold nanoparticles and TiO2 since these can be used to build nanocomposites that will be assembled into a photovoltaic device before this module is over.

In preparation for this lab, a bacterial host E. coli K12 ER2738 (New England Biolabs) was infected with the M13 phage clone named p8#9 that can bind thin gold films ([4]). This infection allowed for amplification of phage as the bacterial culture was incubated over night. These particular phage clones are modified with an 8 amino acid addition to the surface-exposed terminus of the p8 protein -- VSGSSPDS. Phage were obtained by panning, starting with a library of p8 mutants and isolating phage that could bind materials.

Behind the scenes Tahoura and Jackie have also prepared another phage clone, DSPH, that can bind single-walled carbon nanotubes (SWNTs) ([5]) by incorporating the DSPHTELP peptide into p8. They will prepare solar cells utilizing the DSPH phage and SWNTs that you can use to as a comparison for your gold nanoparticle-based solar cells.

Today, you will isolate phage from the infected bacterial culture and measure its concentration using the spectrophotometer. Finally, you will bind the phage to 5, 20, or 50 nm gold nanoparticles. These phage will be used as a template for TiO2 nanowire synthesis incorporated in the dye-sensitized solar cell (DSSC) in future lab sessions.

With this technique you will calculate the concentration of phage in your stock using the spectrophotometer. This method can approximate the number of phage based on the ability of the virions to absorb ultraviolet light. The number of phage is calculated by the formula:
Number of phage particles/ml = (6x10^16)*(A269 - A320)/(#DNA Bases in the genome of the phage)

This method for titering the phage stock is less informative than the traditional plaque method (known as titering) since materials other than phage might be contributing to the absorbance readings. Thus, the number of infectious particles isn't truly known. Since infectivity is not critical for the synthesis of SWNT-TiO2 nanowires,however, we will be using spectrophotometry only.

The class will be optimizing the solar cell's performance by comparing the influence of gold nanoparticles versus SWNT���s on efficiency metrics. In order to make the best use of our time, each team will bind their phage to one of the material parameters in the table below. Performance results between all groups and conditions will be compared after solar cell assembly at the end of the module.

1. The primary assignment for this experimental module will be for you to develop a research proposal and present your idea to the class. For next time, please describe five recent findings that could potentially define an interesting research question. You should hand in a 3-5 sentence description of each topic, in your own words, and also formally cite an associated reference from the scientific literature. The topics you pick can be related to any aspect of the class, i.e. DNA, system, or biomaterials engineering. During lab next time, you and your partner will review the topics and narrow your choices, identifying one or perhaps two topics for further research.