When a circuit contains capacitors and/or inductors, the behavior of the circuit can change with time. Furthermore, often while using these components, we are interested in time-varying input signals, such as a sinusoidal voltage input. Since the current-voltage relationships for capacitors and inductors involve derivatives or integrals, analyzing such circuits often involve differential equations. To simplify our calculations, we can perform the steady-state analysis of circuits with time-varying signals using the frequency domain instead of the time domain. For example, a sine wave constantly varies over time, but only contains one constant frequency. Here we will discuss how to approach circuits using this mind set.

For analyzing the frequency response of circuits with various components, it is convenient to think of a generalized form of resistance, or opposition to current flow, known as impedance ($ Z $). Clearly, we know that a resistor's resistance to current flow is known by its resistance. Although capacitors and inductors don't technically have a "resistance" value, they do resist current flow in their own ways and we can call those their respective impedances. Thus, Ohm's law applies not only to resistances, but to impedances as well:

where $ V $ is the voltage drop across the components of interest, $ I $ is the current, and $ Z $ is the impedance of those components.

Below is a short demonstration of how we can derive the impedances for the circuit elements listed above. Let's use the capacitor as an example. Since we are interested in transient (time varying) signals, we will let voltage $ V $ be a time varying signal $ Ae^{j \omega t}. $ (Click here for a refresher on complex numbers.)

The same exercise can be done for the inductor. It will be left as an exercise for the reader.

Impedances in series and in parallell 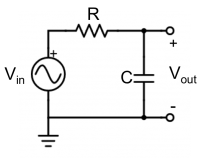 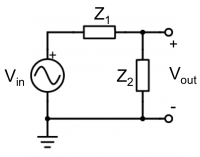 We can see that this circuit is a voltage divider, where

(If you've forgotten about voltage dividers, please visit this page and/or this video.)