This is part 2 of Assignment 4. 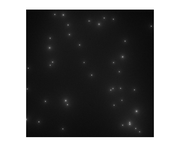 One of the most commonly used definitions of the resolution limit $ R $ of an optical system is the distance between two point sources in the sample plane such that the peak of one source’s image falls on the first zero of the other source’s image. This particular definition is called the Rayleigh resolution.

The theoretical value of $ R $ is given by the formula

where $ \lambda $ is the wavelength of light that forms the image, and NA is the numerical aperture of the optical system. The definition suggests a procedure for measuring resolution: make an image of a point source, measure the peak-to-trough distance in the image plane, and divide by the magnification. In this part of the lab, you will use a procedure inspired by this simple idea to estimate the resolution of your microscope. Instead of measuring the spot sizes with a ruler, you will use nonlinear regression to find best-fit parameters of a two dimensional Gaussian function that best approximates the digital images of (near) point sources that you will make. You will use the best-fit parameters from the regression to compute the resolution measurement.

One practical problem with this method is that true point sources are difficult to come by. If you were an astronomer testing a telescope, stars are readily available in the night sky, and they are very good approximations of point sources. Since there is no natural microscopic sample that is equivalent to the night sky, microscopists have to prepare a synthetic sample suitable for measuring resolution. Prehaps the most common method is to use a microscope slide sprinkled with tiny, fluorescent beads that have diameters in the range of 100-190 nm. These beads are small enough to be considered point sources. Unfortunately, beads small enough for this purpose are not very bright. Imaging them can be challenging. Your microscope must be very well aligned to get good results. (The images you make for this part of the lab will probably remind you of telescope images. If they don't, have an instructor take a look at your setup.)

In outline, the sequence of steps for the resolution measurement is:

Identifying bright regions in an image and computing their properties

The first thing we want to do is get a (real or synthetic) image of point sources. Luckily, we've already generated a synthetic image of 90 nm radius spheres in the part 1 of this assignment.

The next step is to identify pixels of interest. Fortunately, this is a very simple matter because we went to great lengths to make an image that has high contrast, little background, and high SNR. The interesting pixels are the bright ones. A simple, global threshold works well — all the pixels brighter than a certain threshold are (probably) interesting. You might want to think a bit about how to choose the best threshold value. The MATLAB Image Processing Toolbox includes a global threshold function called im2bw( I, level ) which applies a global threshold to image I and returns a binary image (also called a bilevel image or a mask). The binary image is a matrix the same size as I that contains only ones and zeros. You guessed it — there are ones in locations where the pixel value was greater than level and zeroes everywhere else.

FindBrightObjectsInImage returns a struct array with all of the computed properties — an array where each element is a structure. The structure will contain one field for each of the properties in the PropertyList argument. The fields have the same name as the property. For example, if you included 'Centroid' in the property list and there were ten objects in the image, RegionProperties(3).Centroid would return a 1 x 2 matrix with the y and x coordinates of the third region's centroid. If you wanted to create an N x 2 matrix of all of the centroids, you can use MATLAB's : indexing syntax and a concatenation function: AllCentroids = vertcat( RegionProperties(:).Centroid );.

The task of measuring resolution would be super-simple if regionprops had a built-in property called RayleighResolution. Unfortunately, it doesn't, so we will have to write our own function. Nonlinear regression is a good tool for this sort of thing. As long as we have a mathematical model of what the images of beads look like, we can use nonlinear regression to find best-fit parameters for each of the PSF beads in an image.

Regression is a method for finding a relationship between a dependent quantity $ O_n $ and one or more independent variables, in this case the spatial coordinates of the image $ x_n $ and $ y_n $. The relationship is described by a model function $ f(\beta, x_n, y_n) $, where $ \beta $ is a vector of model parameters. The dependent variable $ O_n $ is measured in the presence of random noise, which is represented mathematically by a random variable $ \epsilon_n $. In equation form:

The goal of regression is to determine a set of best-fit model parameters $ \hat{\beta} $ so that $ f(\hat{\beta}, x_n, y_n) $ is as close as possible to your data $ O_n $. Because the dependent variable includes noise, $ \hat{\beta} $ cannot be determined exactly from the data. Increasing the number of observations or decreasing the magnitude of the noise tends to produce a more reliable estimate of $ \hat{\beta} $.

These assumptions are almost never perfectly met in practice. It is important to consider how badly the regression assumptions have been violated when assessing the results of a regression.

The four things you need for nonlinear regression

As shown in the diagram below, you need four things to run a regression: 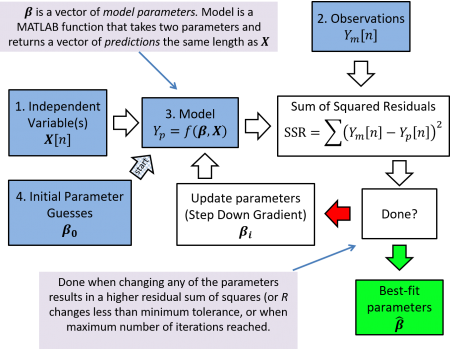 You must provide these four inputs when running a nonlinear fit. The MATLAB function nlinfit will then do the rest of the work for you. It will take your four inputs, calculate the sum of squared residuals, and then continue iterating and tweaking the $ \beta $ parameters until the minimum squared residuals are reached. The output of nlinfit will be the updated parameters $ \hat{\beta} $, that when input to your model function, will most closely match the your measured observations.

Here is a MATLAB function that you may use to fit your resolution data:

This code relies on the following model function:

Whenever you run a nonlinear regression, it is critical that you provide it with the appropriate inputs. Giving nlinfit bad inputs is sure to lead to obscure and confusing errors. So let's spend some time to understand what this function Fit2dGaussian does and how it handles each each of the four required inputs.

nlinfit requires that the regression model be expressed as a function that takes two arguments and returns a single vector of predicted values. The model function must have the form:

The MATLAB function Gaussian2DFitFunction defined above computes the two dimensional Gaussian function that we will use to model the image of a PSF bead. Parameters is a 1x5 vector that contains the model parameters in this order: Y center, X center, amplitude, sigma, and offset.

It's a good idea to test the model function out before you use it. The plot below shows four sets of curves generated by Gaussian2DFitFunction with different parameters. It's comforting to see that the curves have the expected shape. 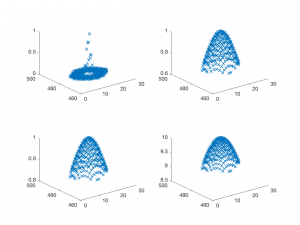 As an example of how to use the model function, let's make a grid from -10 to 10 in x and y, and pick some arbitrary parameters to plot:

Try changing the parameters and seeing how the plotted gaussian changes. Does it behave like you expect?

1. and 2. Independent variable and observations

The Fit2dGaussian function has three inputs. Values is a vector of the dependent variable, Coordinates are the 2-D independent variables, and PlotEnable is an optional input that lets you turn on or off plotting. (the default is false)

The regionprops function can compute two properties that will be useful for the regression: PixelList and PixelValues. These properties exactly correspond to the regression variables. PixelList is an N x 2 matrix that contains the y and x coordinates of each pixel in the region. PixelValues is a vector of all the corresponding pixel values (listed in the same order as the coordinates).

nlinfit requires an initial value for each of the five model parameters, contained in a 1x5 vector. (nlinfit infers the number of model parameters from the size of the Initial guess vector.) regionprops can calculate several properties that are useful for coming up with initial guesses. For example, Centroid is a good starting point for the center of the particle. nlinfit will refine the value as it works. The minimum pixel value is a good guess for offset, and the difference between the maximum and minimum (range) pixel values is a good guess for amplitude. The number of pixels brighter than half of the range is the basis for a guess at sigma.

Notice how the initial parameters are estimated in Fit2dGaussian (repeated below):

The first step of all regressions is to plot the observations and the model function evaluated with the initial guesses versus the independent variable on a single set of axes. Don't attempt to run nlinfit until you've done this plot. It is much easier to ensure that the arguments to nlinfit are plausible before you invoke it than to debug a screen full of cryptic, red text afterwards. Side effects of premature regression include confusion, waste of time, fatigue, irritability, alopecia, and feelings of frustration. Contact your professor if your regression lasts more than four hours. There is no chance that nlinfit will succeed if there is a problem with one of its arguments.

For example, you can test out the Fit2dGaussian function on the 2-D Gaussian that you just made above. 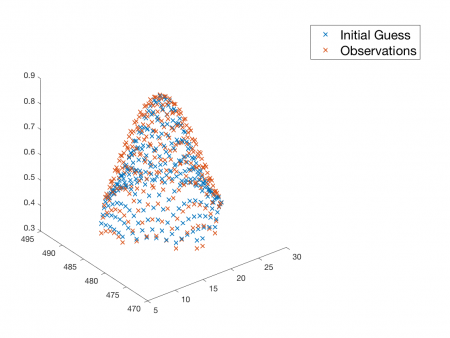 Notice that the data and the model evaluated at the initial guesses are pretty close to each other. If they didn't look remotely similar, you would need to adjust the initial parameters that you choose. nlinfit will output nonsense if you do not give it a good place to start.

You may also try testing our fitting function using one of the bright regions from your PSF image.

Once you know that your initial guesses are good, you can be much more confident that nlinfit will output credible results.

Repeat the process for each bright region in your image

Now that you deeply understand all that goes into nonlinear regression, repeat the process for each of the bright regions in your image. Our final value for our measured resolution will be an average of all of the airy disc sizes in our image. The function below is mostly fleshed out for you, but you may want to make a few changes and additions.

It's frequently the case that a few of the beads in a real PSF image are not good candidates for measuring resolution. For example, there are sometimes two beads that are too close together to separate. Sometimes, there are also aggregates of multiple beads in the picture. Identify some useful properties that regionprops computes for sorting out the bad regions and write code to eliminate them.

A bit of MATLAB syntax that you might find useful is this: you can remove an element from an array by assigning it to be the empty value []. Some examples:

Measure the resolution of your microscope