It was certainly a curious sight to see the tube instantaneously lighted up when plunged into the invisible rays: it was literally darkness visible. Altogether the phenomenon had something of an unearthly appearance.

The phenomenon of fluorescence has beguiled both sober and inebriated witnesses since at least the late sixteenth century. Some of the earliest observers noticed an unusual blue tint in water that had been infused with the wood of a Mexican tree called Coatli. Other naturally-occurring fluorescent and phosphorescent materials such as Bologna Stone (baryte), fluorite, and quinine sparked considerable interest from some the most preeminent scientists in all of history. Galileo Galilei, Robert Boyle, David Brewster, John Herschel, and that trippy dude from your high school with all the black-light posters in his room all spent time contemplating the curious nature and simple beauty of fluorescence. 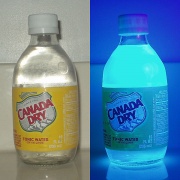 The brilliant physicist and mathemetician George Stokes conducted a particularly clever experiment in which he used a prism to separate sunlight into its component colors. As he moved a vial of quinine sulfate from color to color, Stokes noted that quinine fluoresces only when illuminated by ultraviolet light — the invisible part of the rainbow just beyond the majestic blue band. The vial of quinine did not glow when Stokes placed the it in any other part of the rainbow. Because ultraviolet illumination gave rise to blue light, Stokes concluded that fluorescent emission has a longer wavelength than the excitation. This observation turns out to be spot on, and in his honor the difference in wavelength between the excitation and emission peak a fluorophore's spectrum is called the Stokes shift.

Reconciling Stokes' observation with the prevailing theory of light at the time of Stokes' experiment proved to be extraordinarily difficult. The classical theory of electromagnetism was the best thing going at the time. In the classical theory, a more intense beam of light has a larger electric field. The classical theory suggested that intense light ought to excite a fluorescent sample. But Stokes observed that it was the color of the light instead of its intensity that mattered. Ultraviolet is the only color of light that excites quinine, regardless of how bright any other color is.[1] In order to explain Stokes' observation, Albert Einstein had to dream up a whole new model for how light works: the quantum theory. Einstein introduced the idea in one of his "miracle year" papers in 1905 with the dense title of Concerning an Heuristic Point of View Toward the Emission and Transformation of light. It's is a lovely paper, and you should definitely put it on your reading list. In the paper, Einstein posited that light is made out of discrete energy packets (which we now call photons).

The energy of a single photon depends only on its wavelength (color) and is given by the equation:

where ν is frequency, c is the speed of light, $ \lambda $ is wavelength and h is the Planck constant approximately equal to 6.626070040(81)×10−34 J⋅s. In Section 7 of Einstein's paper, he offered a persuasive theoretical argument for the correctness of Stokes' rule despite the fact that the mechanism of fluorescence was not known at the time: "If the fluorescent substance is not a perpetual source of energy, the principle of conservation of energy requires that the energy of an emitted energy quantum cannot be greater than of the incident light quantum.."[2]

The diagram below depicts the sequence of events that gives rise to fluorescence. The process begins with a molecule absorbing a photon. This increases the amount of energy stored in the molecule. Most of the energy goes into raising the energy level of an electron above its ground state. The remainder goes toward increasing the vibrational energy of the molecule. After absorbance, the molecule very rapidly sheds some of its energy through the processes of vibrational relaxation and internal conversion. Both of these processes convert some of the photon's energy to heat. After that, the molecule returns to its ground state by emitting a photon. Since some of the original photon's energy was lost to heat, the emitted photon has a longer wavelength (and hence lower energy) than the original one.

In 1933, Aleksander Jablonski published a simple diagram similar to the one below. The diagram shows the details of the energy transitions that that take place during fluorescence and phosphorescence. The vertical axis of the diagram represents total energy. Another implication of the quantum theory is that when electrons are confined to a space (for example, bound to a molecule), they can only occupy certain discrete energy levels. Allowable electronic energy levels are indicated by thick horizontal lines. The ground state of the molecule S0 appears at the bottom of the diagram. Two excited states are shown: S1 and S2. As energy increases, the difference in energy between states gets smaller. Fine horizontal lines above each electronic energy level represent energy stored in vibrational modes of the molecule. (Vibrational energy is also discrete.) Thus, each line represents a possible value for the sum of electronic and vibrational energy. 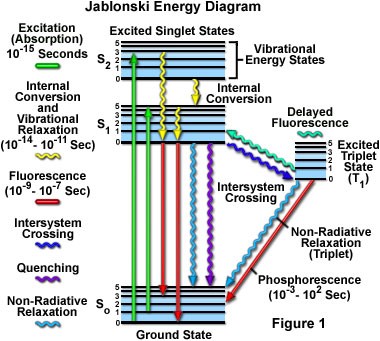 The possible energy states are grouped into two columns. Each column represents a different molecular spin state. The spin state depends on the number of unpaired up/down electron spins. Singlet states (denoted by the letter "S") have no unpaired spins while triplet states (denoted by "T") have two unpaired spins. Don't sweat the details too much. The bottom line is that transitions within a column are much more likely than transitions that cross columns. Fluorescence does not require an electron to change spin. It is a fast phenomenon that takes place entirely in the lefthand column. Phosphorescence involves an electron changing its spin. The probabilities of the transitions are much lower and hence phosphorescence occurs over a much longer timescale (up to hours).

It's not a coincidence that fluorescence takes place for the most part in visible wavelengths. The diagram below shows that single photons with wavelengths longer than about 700 nm have energies less than about 1.8 electron volts (2.88×10-19 J), which roughly corresponds to the energy range of vibrational modes of molecules. Visible photons (λ= 400 - 700 nm) have energies in the same range as the differences between in energy levels of electrons bound to a molecule. X-rays (0.01 - 10 nm) have higher energy — more than enough energy to completely remove an electron from a molecule instead of just exciting it to a higher energy state. Ultraviolet light bridges the gap. 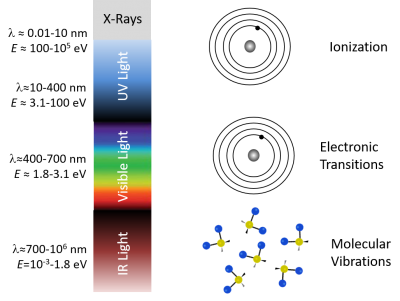 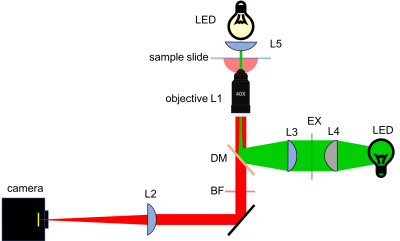 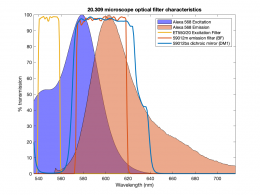 Excitation light comes from beneath the sample, through the objective lens. A dichroic mirror directs the excitation toward the objective and sample. The mirror must reflect wavelengths in the excitation range and pass the longer wavelengths of the emitted fluorescence. In fluorescence imaging, illumination intensity is typically 5 or 6 orders of magnitude greater than emitted fluorescence, so it is crucial to filter out excitation photons as completely as possible. The dichroic mirror passes a substantial amount of green light, on the order of five percent. The barrier filter does a much better job of removing the green light, attenuating the excitation wavelengths by about 5 orders of magnitude. The barrier filter is essential for making crisp, high-contrast images.

In Assignment 3, you are going to make images using the fluorescent dye Alexa Fluor 568, manufactured by ThermoFischer Scientific. The peak excitation wavelength for the dye is 568 nm (as you may have surmised from the name). To excite this dye, you can either use a light source with a very narrow wavelength range (like a laser), or a broadband source (like an arc lamp or an LED) combined with an excitation filter (which effectively reduces the excitation light to a small range of wavelengths). We've chosen a high power Luxeon Rebel Lime LED as a light source (part number LXML-PX02-0000, data sheet available here) to use as the excitation source for our microscope. LEDs are becoming more widely used in fluorescence microscopy in recent years because of the wide range of wavelengths available, and their relatively low cost.

In contrast with the transilluminated bright-field approach where the LED incident light traverses the sample before reaching all image-forming optics, illumination for epi-fluorescence microscopy reaches the sample through the objective lens — from the same side of the sample that is observed. The rationale behind this design choice is the relative dimness of the fluorescence emission signal with respect to the needed excitation intensity (you will calculate this in a future Assignment). Even though fluorescence excitation and emission occur at distinct wavelengths and can thus be filtered away from one another, it is still advantageous to direct the very bright excitation light source away from the imaging system.

Unlike a laser, which is typically collimated into a narrow beam of parallel rays, LED light sources are very divergent. In other words, light from an LED is emitted in a large range of angles. When building an LED illuminator, our first goal is to collect as much of this light as we possibly can and direct it towards our sample. The divergent nature of LEDs are already working against us, but by understanding some optics subtleties, we can overcome at least some of the hurdles.

Here are some considerations that we'll use to design our illuminator: