The process of scientific inquiry encompasses much more than the collection and interpretation of data. A key part of the process is design – specifically of experiments that address a hypothesis and of new materials or technologies. Moreover, any design is subject to continued revision. You might redesign an experiment or tool based on your own research, or you might consult the vast body of scientific literature for other perspectives. As the old graduate student saying (sarcastically) goes, “A month in the lab might save you a day in the library!” In other words, although the process of combining the literature can be arduous or even tedious at times, it beats wasting a month of your time repeating experiments previously demonstrated not to work or reinventing the wheel.

During this module, you will generate and test a new version of inverse pericam (IPC). Today, you will refer to a few primary research articles to familiarize yourself with this recombinant protein and its constituent parts. The fluorescent component of IPC is an enhanced yellow fluorescent protein (abbreviated EYFP), one of the many derivatives of green fluorescent protein (GFP). GFP is naturally produced by jellyfish and was cloned into other organisms in the early 1990’s. It has since been exploited as a genetically encodable reporter and mutagenized to vary its excitation and emission spectra. The other key component of inverse pericam is the protein calmodulin (CaM), a natural calcium sensor that is present in all eukaryotes (briefly reviewed here). Calmodulin has many ligands that it binds only in the presence of calcium ion, including the peptide fragment M13. This conditional specificity for M13 binding is enabled by the change in CaM’s conformation when it binds calcium. 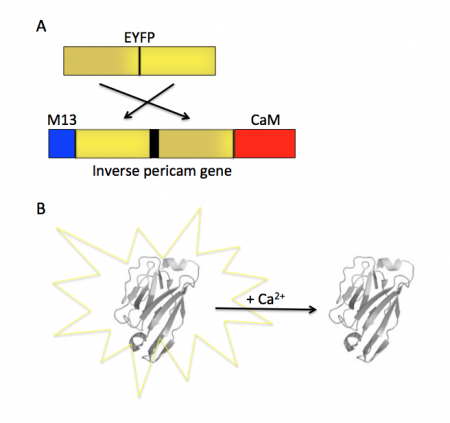 Within inverse pericam, M13 and CaM are located at opposite ends, surrounding a permuted (i.e., rearranged) version of EYFP. In the absence of calcium, this EYFP exhibits strong fluorescence. However, when enough calcium is added to a solution of inverse pericam, CaM and M13 interact, disrupting the conformation and, as a result, the fluorescence of EYFP. The transition from bright to dim fluorescence occurs over a particular concentration range of calcium. The calcium concentration at which binding to CaM occurs (and fluorescence decreases) is referred to as the Kd and determined by the affinity of CaM to calcium. In addition, the interaction between CaM and calcium is impacted by cooperativity. CaM has four calcium binding sites. In cooperativity, the affinity of CaM for calcium is altered by how many calcium ions are already bound to the protein. Your goal today is to propose a mutation that will modify the calcium sensor portion of inverse pericam in a manner that is likely to change the affinity and/or cooperativity for calcium ions.

To examine potential modifications to inverse pericam, we will use several protein analysis tools. Proteins are modular materials that may be described and examined at multiple levels of a structural hierarchy (from primary to quaternary in the classical paradigm). Primary structure refers to a protein’s amino acid sequence, which might reveal a cluster of charged residues or a pattern of alternating polar and nonpolar residues. One cannot predict off-hand the conformation of a protein merely from its linear sequence; however, due to rotational flexibility of bonds and non-covalent interactions between non-adjacent amino acids (as well as covalent disulfide bonds) some structural characteristics can be inferred.

Physical methods used to interrogate 3D protein structure include X-ray diffraction (XRD), electron microscopy (EM), and nuclear magnetic resonance (NMR) spectroscopy. The paper by Zhang et al. that you will refer to today describes the decoding of calmodulin’s structure using NMR, which depends on subjecting molecules to electromagnetic fields and analyzing the resulting energy absorption spectra of their nuclei. Scientists who elucidate protein structures, in addition to publishing their results, will often add them to public databases such as the Protein Data Bank (PDB). Because many proteins have structural motifs in common (e.g., alpha helices and beta sheets at the secondary level, or leucine-rich repeats at the tertiary level), which ultimately arise from their amino acid sequences, such databases can be useful for making predictions about proteins with known amino acid sequences but unknown structures. Today we will use a computer program that harnesses information in the Protein Data Bank to display interactive 3D models.

Now might be a good time to mention why we care about measuring intracellular calcium in the first place. Calcium is involved in many signal transduction cascades, which regulate everything from immune cell activation to muscle contraction, from adhesion to apoptosis - see for example this review by David Clapham in Cell, or this one by Ernesto Carafoli in PNAS. Intracellular calcium (Ca2+) is normally maintained at ~100 nM, orders of magnitude less than the ~mM concentration outside the cell. ATPase pumps act to keep the basal concentration of cytoplasmic calcium low. Often calcium acts as a secondary messenger, i.e., it relays a message from the cell surface to its cytoplasm. For example, a particular ligand may bind a cell surface receptor, causing a flood of calcium ions to be released from the intracellular compartments in which they are usually sequestered. These free ions in turn may promote phosphorylation or other downstream signaling.

The proteins that bind calcium do so with a great variety of affinities, and have roles ranging from sequestration to sensing. Some calcium responses may have long-term effects, particularly in the case of transcription factors that can bind calcium. As discussed in lecture, calmodulin works as a calcium sensor by undergoing a conformational change upon calcium binding. Your goal today is to design mutation primers that will generate mutant calmodulin (in the context of inverse pericam) DNA, in an attempt to alter the affinity and/or cooperativity of the resulting protein for calcium.

Electrophoresis is a technique that separates large molecules by size using an applied electrical field and a sieving matrix. DNA, RNA and proteins are the molecules most often studied with this technique; agarose and acrylamide gels are the two most common sieves. The molecules to be separated enter the matrix through a well at one end and are pulled through the matrix when a current is applied across it. The larger molecules get entwined in the matrix and are stalled; the smaller molecules wind through the matrix more easily and travel further from the well. The distance a DNA fragment travels is inversely proportional to the log of its length. Over time fragments of similar length accumulate into “bands” in the gel. Higher concentrations of agarose can be used to resolve smaller DNA fragments.

DNA and RNA are negatively charged molecules due to their phosphate backbone, and they naturally travel toward the positive charge at the far end of the gel. Today you will separate DNA fragments using an agarose matrix. Agarose is a polymer that comes from seaweed and if you’ve ever made Jell-O™, then you already have all the skills needed for pouring an agarose gel! To prepare these gels, agarose and 1X TAE buffer are microwaved until the agarose is melted and fully dissolved. The molten agar is then poured into a horizontal casting tray, and a comb is added. Once the agar has solidified, the comb is removed, leaving wells into which the DNA sample can be loaded.

You will use a 1% agarose gel (prepared by the teaching faculty) to separate the DNA fragments in your four digested samples as well as a reference lane of molecular weight markers (also called a DNA ladder).

Perhaps nothing is so conducive to a feeling of intimate familiarity with a protein as studying it at the amino acid level (primary structure). For the next part of lab today, you will examine a two-dimensional representation of inverse pericam. 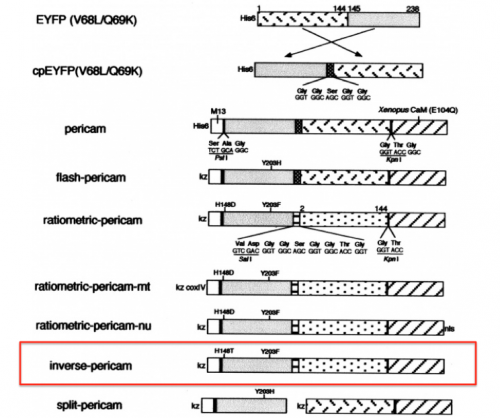 Print out your annotated document and hang on to it for reference. Now let’s put some visuals to all those letters!

Unless we are precocious bioengineers indeed, looking at the amino acid sequence alone is unlikely to tell us too much about the protein. We might be left wondering where the binding sites for M13 and for calcium ions are located in calmodulin, for example. In the previous section, you read some primary scientific literature to locate these features. Now you will use a tool called Protein Explorer to visualize them. As you work, you can ask yourself why these stretches of the protein might work the way that they do, and how they might be changed. 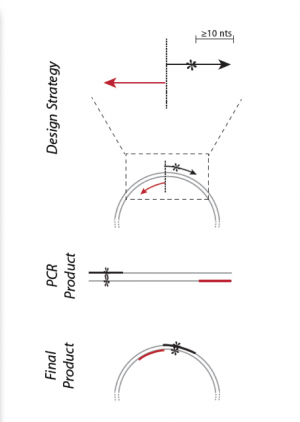 It wouldn’t be very experimentally efficient to somehow pick out and modify a single residue on inverse pericam post-translationally. Instead, researchers genetically encode desired mutations, by making mutated copies of a plasmid that contains the inverse pericam DNA sequence. In addition to non-mutagenic amplification of a specific piece of DNA, synthetic primers can be used to incorporate desired mutations into the DNA. Primer design for site-directed mutagenesis is quite straightforward: the forward primer introduces a mutation into the coding strand. Both non-mutagenic and mutagenic amplification require cycles of DNA melting, annealing, and extension.

Remember from Day 1 that primers used in PCR amplification must meet several design criteria in order to ensure specificity and efficiency. Consider the following design guidelines for mutagenesis primers and think about how these differ from the guidelines for non-mutagenic amplification:

To demonstrate primer design, the illustration below uses S101L, which is an uninteresting mutation but is a straightforward teaching example.

Residue 101 of calmodulin is serine, encoded by the AGC codon. This is residue 379 with respect to the entire inverse pericam construct, and we can find it and some flanking code in the DNA sequence from Part 2:

To change from serine to leucine, one might choose TTA, TTG, or CTN (wherer N = T, A, G, or C). Because CTC requires only two mutations (rather than three as for the other options), we choose this codon.

Now we must keep >10 bp of sequence on each side in a way that meets all our requirements. To quickly find G/C content and see secondary structures, look at the IDT website. (Note that the Tm listed at this site is not one that is relevant for mutagenesis.)

Lucky for us, NEB has a tool that can design our mutagenic primers.