For the next experiment in this module you will use the CometChip assay developed in the Engelward Laboratory. The CometChip assay is used to assess various types of DNA lesions, including base excisions, abasic sites, strand breaks, and crosslinks. 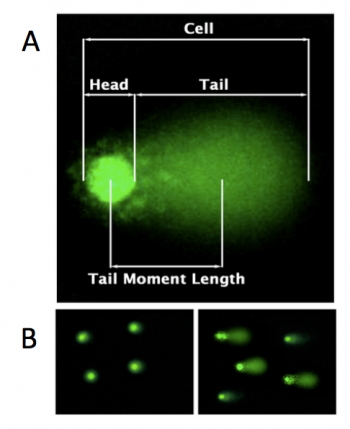 Microscopy images showing results from CometChip assay. A. In the CometChip assay DNA damage is measured by determining the amount of DNA in the head versus the tail of the comet. B. Cells not treated with DNA damaging agent (left) have visibly less DNA damage that cells treated with DNA damaging agent (right) as evidenced by the amount of DNA in the tail.
To measure DNA damage, the CometChip assay relies on gel electrophoresis. Electrophoresis is a technique used to separate molecules by size using an applied electrical field and a sieving matrix. DNA, RNA and proteins are often studied with this technique; agarose and acrylamide gels are the two most common sieves. The molecules to be separated enter the matrix through a well at one end and are pulled through the matrix when a current is applied. Because DNA and RNA are negatively charged molecules due to their phosphate backbone, they naturally travel toward the positive charge at the far end of the gel. Larger molecules are entwined in the matrix and are stalled; smaller molecules wind through the matrix more easily and travel further from the well. Over time fragments of similar length accumulate into 'bands' in the gel. The CometChip assay is based upon the principle that damaged DNA travels more readily compared to undamaged DNA.

In the CometChip assay, cells are loaded into microwells that are 'stamped' onto an agarose gel sieving matrix. Specific treatments can then be applied to the cells within these microwells that induce DNA damage. The cells are then lysed to release the DNA into the microwell. Following cell lysis, the CometChip is incubated in an alkaline buffer that unwinds the DNA. This step allows for all types of DNA damage to be detected. Lastly, gel electrophoresis is used to separate the DNA fragments. DNA fragments migrate away from the microwell and generate a comet tail as shown in the image to the right (panel A). The distance that the DNA migrates (i.e. the length of the comet tail) is proportional to the amount of damage. For example, with cells not treated with a DNA damaging agent, there are no evident comet tails to the right of the microwell or 'head' (panel B, image on the left); however, in cells treated with a DNA damaging agent there are comet tails apparent (panel B, image on the right). Comet tail lengths can be compared across experimental treatments to determine the deleterious effects of chemicals and toxins on DNA stability. In addition, the CometChip assay can be used to study the rate and efficiency of repair in response to specific treatments.

Part 1: Learn about the CometChip

As discussed in the prelab lecture, you will use two methods to assess DNA damage: the γH2AX assay and the CometChip. Before we review the CometChip experimental details, it is best to familiarize yourself with the procedure and assay.

Read the Abstract and Introduction in the following publication:

In your laboratory notebook, answer the following questions: 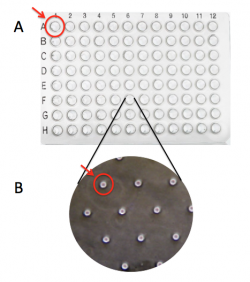 Image of CometChip showing distinction between (A) 'macrowell' and (B) 'microwell'.
The CometChip is simply a thin layer of agarose with microwells. It is important to differentiate between the terms 'macrowell' and 'microwell' for your experiments. A bottomless 96-well plate is placed on top of the agarose CometChip to create the macrowells for the CometChip assay (panel A). This enables researchers to control which cells are exposed to which treatment. The microwells were stamped into the agarose when you made your CometChip (panel B). Within each well are ~ 300 microwells, which are ~40 μm in diameter and 40 μm in depth.

To ensure the steps required for preparing a CometChip are clear, the Instructor will provide a live demonstration of this process. You should provide a written description of the procedure in your laboratory notebook!

In addition, a video demonstrating the finishing procedure to make a CometChip is linked here: Making the CometChip

Expose cells to As
Due to the timing of the As treatment, the Instructors completed the below steps using the cells that you seeded in the T75 flasks during the previous laboratory session. Using the As treated cells you will complete the steps starting at Load cells into CometChip.

Due to the timing of cell lysis, the Instructors will complete the below steps.

To ensure the steps required for preparing a CometChip are clear, the Instructor will provide a live demonstration of this process. The steps are detailed below so you can follow along!