Download the data provided in the class dropbox folder. This data was collected by 20.309 students last semester. The movies were collected using the same 20.309 microscope that you built in class with an upgrade (that you would have done in Assignment 8 had we been on campus...) to incorporate a second fluorescence color. During an experiment, the microscope first recorded an image with blue illumination (exciting GFP) followed by one with green illumination (exciting RFP). It had a 40x objective and a 125 mm tube lens - remember that results in a 25x magnification.

The sample is similar to the one in Mettetal et al.: we are using S. cerevisiae with the protein Hog1 fused to GFP (which is excited by blue light) and an mRNA binding protein (we'll call MCP) fused to tagRFP (which is excited by green light) to locate the nucleus. A solenoid valve controls whether or not the medium provided to the yeast cells contains a high salt concentration, and in the experiment we oscillate between a high and low salt medium at a fixed rate. We expect to see the yeast cells 'respond' to an osmotic shock as a more localized Hog1-GFP signal that overlaps with the signal from the nucleus (RFP). Our goal is to calculate the average correlation coefficient between Hog1 and the nucleus as a function of the high/low valve state.

Load some data into MATLAB:

The data is stored in a struct called yeastOsmoticShockData.

The data structure contains all the important information from the experiment: 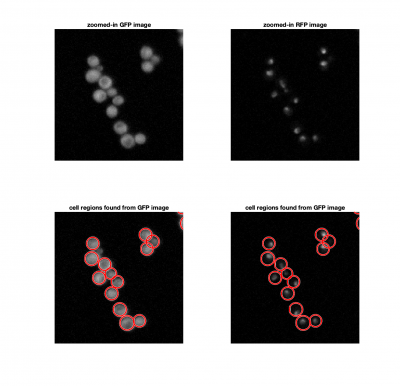 Start with the following basic layout of the function:

As you work through this part of the Assignment, fill out the AnalyzeFrame function to incorporate each of the outlined steps.

We could consider using a threshold to identify cells in an image, similar to how we found fluorescent particles in Assignments 4 and 5. The problem here, is that thresholding doesn't allow us separate a single cells from a clump of cells. Since we know that yeast cells are roughly spherical, we can use imfindcircles to locate them. imfindcircles is an implemenattion of the Hough transform.

The function viscircles(cellCenters,cellRadii) may be useful to visualize your results.

Next we want to calculate the response of the Hog1 protein. In the paper, they calculated the response as the ratio of GFP intensities inside and outside the nucleus: $ R_{Hog1} = \frac{<GFP_{nucleus}>}{<GFP_{cell}>} $. We'll use an alternative way to find the response: by finding the correlation coefficient between the GFP and RFP signals within each cell.

Finish filling out AnalyzeFrame to loop through each circle found in the frame and extract the corresponding pixel intensities from your GFP and RFP images. Then, calculate the correlation coefficients between these two intensity vectors (corr in MATLAB). The following helper function may be useful.

Once you've collected each individual correlation coefficient, find the mean and standard error, and output these from the function.

Once you've set up your analysis for a single frame, you'll now want to loop through the movie and collect the responses as a function of time.