We set out to add functionality to the trap control software[1], specifically we wanted to automate centering of the DNA-tethered bead using a centering algorithm which we would write in MATLAB. To center the DNA-tethered bead we would need to learn how to communicate with different electronics using DAQ and the daqtoolbox in MATLAB, how to test a code which is supposed to provide specific functionality, and a bit about the UI in MATLAB. Beyond this, we tried to:

The worm-like chain model is one method to approximate the behavior of DNA when stretched. Here we are interested in the extension curve of a DNA tether, so that we may use its (hypothetically) linear region to calculate the place of tether attachment. We fitted our data (guided by calibration calculations) to the following model equation using nlinfit to solve for the persistence and contour lengths.

Past attempts at calibration yielded these values, which were used in the extension curve fit. (While values were found using the PSD method outlined in the 20.309 lab manual[2] with n=14, 18, 16 at V=30, 60, 90 mW, they failed to follow a consistent logical progression, and therefore should be taken with a grain of salt. We tried using other data - from past years and this semester - to glean better results, to no avail.) 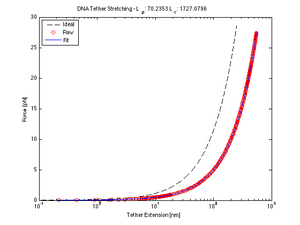 Figure 1. A force extension graph showing the raw and fit data with the ideal. Calculated the contour and persistence lengths using data collected in a 20mW trap while the sample underwent sinusoidal oscillation in the y-direction.

Proof of Concept for Center Calculation

The following data is one example, taken from tethered bead data at 20 mW. This method will work best with a tethered bead stuck in the trap at an oscillation amplitude > the length of the tether. 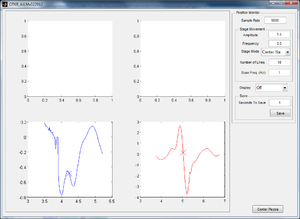 Figure 4. This is an example of the GUI while the function calculates the center of the trap in the y-direction. Calculated centers are marked by a X.

You can view the functions on my Public until ~June 2012.

We took this code from Steve Wasserman and tweaked it to include our function.