After reading this page and working through the example optical systems, you should be able to use ray optics to understand the function of many optical systems that you encounter or desire to build. 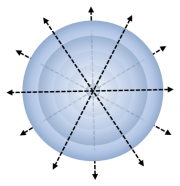 Perhaps the most fundamental solution to Maxwell's equations is the spherical wave, in which light propagates from a point in space uniformly in all directions. It's called a spherical wave because all points at an equal distance from the source — on the surface of a sphere — have the same magnitude electric (and magnetic) field at every point in time. The ray representation of a spherical wave is just a bunch of arrows with their tails on the source and their heads pointing outward, as shown in figure Figure 1. (Most ray diagrams yourepresent a two-dimensional slice of space.) Since the source is isotropic, it's okay draw a ray in pretty much any direction you feel like. In most cases, certain rays are more helpful for understanding a system than others.

Another fundamental solution to Maxwell's equation is the plane wave. In plane waves, the electric field has the same magnitude in all planes perpendicular to the direction of propagation. Conceptually, a plane wave propagating in the z direction is generated by an infinite number of identical, in-phase point sources uniformly distributed in a plane at $ z=-\infty $. Wavefront and ray representations of the plane wave are shown in Figure Figure 2. Plane waves are a useful model for some circumstances, but real plane waves cannot be generated because of their infinite extent (which means a real plane wave would require an infinite amount of power). 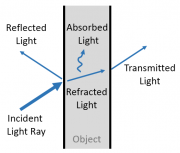 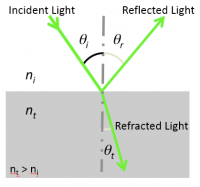 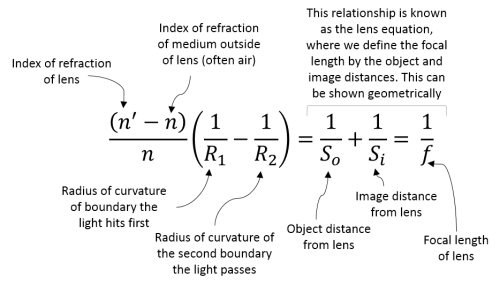 Examples of real and virtual images

Let's use ray tracing to walk through a few examples of real and virtual images. In these examples we will consider the lens of your eye and the image formed on the retina.

A) Trace the rays to check her work and see where the image is formed.

B) Is the final image the same orientation as the original image, or is it inverted?

C) Use the lens equation to find the distance between the final image and the one she started with.

Once you've worked it out on your own, you can check your work here.

A) Trace the rays to show how your microscope works and where the image is formed. Is the image real or virtual? upright or inverted? Note that this time the object is on the right and the image will form at the left.

B) Calculate how much magnification you get from this optical system.

C) Will your microscope still work if we change the distance between the lenses?

D) Does changing the distance between the lenses affect the amount of magnification you achieve?

Once you've worked it out on your own, you can check your work here.

Say you're building a microscope and you want to expand the coverage of light that is illuminating your sample. You decide you want to build a beam expander to accomplish this. Assume that the incident light is collimated and you want the resulting light from your beam expander to also be collimated. Come up with two ways to make a beam expander using only two lenses each time--one way with two converging lenses, and another way with one converging and one diverging lens. For each system, answer the following questions:

A) At what distance do the two lenses have to be for the light to still be collimated when exiting the second lens?

B) How much have you magnified the beam after the second lens?

C) Is the final image inverted or upright?

D) What happens if you switch the order of the lenses?

Once you've worked it out on your own, you can check your work here. Solutions are only shown for the method using a diverging and converging lens.