Lets get started writing functions to model each physical process that contributes to our DNA melting signal.

The state variables in a thermal circuit model are temperature T and heat flow q. A fundamental assumption of lumped element models is that each element has a single value of both state variables. Because of this assumption, lumped element models only work well if the bodies you are modeling have a nearly uniform temperature. Components that are small in size, have high thermal conductivity, and have low heat transfer coefficients are most suitable for lumped element modeling. These attributes are summarized by the Biot number, Bi=hl/k, where h is the heat transfer coefficient, l is the characteristic length of the body (volume divided by surface area), and k is the thermal conductivity of the material. Bodies with Biot numbers less than 1 are good candidates for lumped element models. The Biot number for the heating block is on the order of 6x10-3, assuming h=50 W/m2 K, l=3 cm, and k=235 W/m K. This is much less than one, so the heating block is a good candidate for a lumped element model. The Biot number for the glass vial is about 0.03 (h=10.5 W/m2 K, l=3 mm, and k=1.05 W/m K).

The model neglects the heat capacity of the vial. 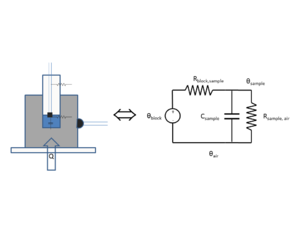 The thermal circuit model for the heating system is shown in the figure on the right. The circuit is a first-order, low-pass filter. In this circuit, a step increase in block temperature causes the sample temperature to rise exponentially to a peak value of Kthermal with time constant τthermal.

The transfer function of the low-pass filter has two parameters:

MATLAB includes several functions for simulating continuous-time, linear, shift-invariant (CTLSI) systems. You can write the transfer function of a CTLSI system as the ratio of two polynomials in $ s $, where $ s=j\omega $. For example, the transfer function of a low-pass filter can be expressed in the form $ H(\omega)=\frac{1}{\tau s+1}=\frac{1}{\tau j \omega+1} $. The MATLAB function tf constructs a software object that represents a CTLSI transfer function. tf takes two arguments that specify the coefficients of the numerator and denominator polynomials. The arguments must be formatted as vectors containing the coefficients of $ s $ in order of decreasing power. For example, the transfer function $ \frac{1}{60 s + 1} $ can be created by:

Several functions operate on continuous-time transfer function objects. For example bode and impulse generate bode and impulse response plots as expected. (Perhaps the Vice President of Inconsistent Naming at MathWorks was out sick the day those functions were named.) There is also a CTLSI simulator called lsim that will be useful for deriving the sample temperature from the block temperature using a lumped-element model of the thermal low-pass system realized by the heating block, glass vial, and sample. (Seems like the Director of Inconsistencies was back in the office when lsim got named.)

The SimulateLowPass MATLAB function below uses lsim to produce the simulated output of a low-pass filter given its time constant, a vector of input values, and an optional vector of time values. If supplied, the time vector must be the same length as the input vector (i.e. each time value corresponds to one input value). If no time vector is passed, the function generates a time vector assuming that the input values are sampled uniformly at ten times per second, starting at $ t=0 $. The DNA melter software produces ten samples per second.

Save the above function to your MATLAB working directory as SimulateLowPass.m.

Excited dye molecules can react chemically with compounds in their environment and permanently lose their ability to fluoresce — a phenomenon called photobleaching. LED and ambient light illuminate the LC Green dye for 15 or more minutes over the course of a single melting and annealing cycle, which results in measurable photobleaching. The effect of photobleaching can be approximated by a mathematical model.

Under these assumptions, the bleaching rate is proportional to fluorescence.

Setting the initial dye concentration to 1, the fraction of unbleached LC Green can be calculated by integrating:

A simple way to approximate an integral in discrete time is a cumulative sum: $ \int_0^t f(t) \mathrm{d}t\approx \sum_{n=1}^{t F_s}f(n / F_s) / F_s $, where $ F_s $ is the sample rate. This works particularly well when the signal changes slowly relative to the sample period. It's a good bet that the bleaching time constant is much longer than the 0.1 s sample period. MATLAB has a built-in function for computing cumulative sums called cumsum. Here is an example:

But what is $ f(t) $ in this case? If you think about it, our model is becoming a bit circular. We are trying to find an expression for the fluorescence as it depends on time and temperature, but we need to already know the fluorescence in order to effectively model photobleaching? Kind of weird... It turns out this stuff happens all the time and we can solve the problem iteratively. That is, we can start with a somewhat-decent guess for $ f(t) $, and use it to calculate a better guess for $ f(t) $. To first-order, we already have a decent guess of the functional form of $ f(t) $ in our expression for $ C_{ds} $. Using the DnaFraction function (available on this page) as a proxy for $ f(t) $ here works relatively well.

LC Green fluoresces less efficiently at higher temperatures. The decrease in fluorescence is approximately linear. Defining the dye efficiency at the initial temperature to be 1, quenching can be modeled by:

There are several optical and electronic gain factors built into the DNA melter that determine the instrument responsively, ∂Vf,measured / ∂ Cds. In addition, Vf,measured may be offset from zero when Cds concentration is zero.

Once you have all the pieces, put everything together into a single model function representing:

Here, Cds is the model melting curve produced by the DnaFraction function from Assignment 7.

Back to 20.309 Main Page
Retrieved from "http://measurebiology.org/w/index.php?title=Assignment_9,_Part_1:_model_function&oldid=37053"
Categories: