This is Part 2 of Assignment 7.

In theory, there is no difference between theory and practice. But, in practice, there is.

Overview of the lab portion of this assignment

In this part of the lab, you will construct a crude version of a temperature-cycling fluorometer and measure a DNA melting curve or two. Even though this first version of the instrument has some shortcomings, it will give you a good idea of how all of the parts work together to make melting curves. The instrument includes a resistance temperature detector (RTD) to measure the temperature of the sample holder, a blue LED to excite the sample, a Peltier device that will heat the sample, optical filters, a photodiode for detecting fluorescent emission, a high-gain transimpedance amplifier to convert photocurrent to voltage, and a computer data acquisition system to record the voltages that come out of the instrument.

When you get it all put together, the instrument will produce two voltages: one related to the sample temperature and another that depends on the amount of fluorescence coming out of the sample. The goal of this first part is to produce at least one reasonable quality melting curve. This involves recording the temperature and fluorescence voltage as you heat a sample of DNA + dye from room temperature to about 95°C and then let it cool back down. Computer software for recording the voltages has already been written for you. After you have a melting curve, you will use nonlinear regression to fit thermodynamic parameters to your data and do a little planning for part 2 of this lab. You will probably notice some shortcomings your instrument as you work. Don't worry about that — in part 2, you will make many improvements to your machine that will make it sing like Elvis.

There are instructions below for assembling your DNA melter.

Before you get started in the lab …

Two parts of the DNA melter require you to do some design work. You will have to decide what lenses (if any) you would like to use in your system and you will also need to select component values for your transimpedance amplifier. Come up with at least a preliminary design both of these before you start building.

It's possible to build a DNA melter with no lenses at all. Most people find that they can get a better signal-to-noise ratio if they use lenses. The goal is to get as much of the light from the LED to fall on the sample as possible and to get as much of the fluorescent emission on to land on the photodiode as possible. The active area of the photodiode is 3.6 mm x 3.6 mm. Take a little time to think about what lenses you'd like to use between the LED and the sample and photodiode and the sample. It wouldn't hurt to draw a ray diagram.

Fluorescent light from the sample falls on the photodiode and produces a photocurrent. The amount of current depends on the irradiance of the sample and the light collection efficiency of your optical system (and probably some other stuff). In most instruments, the photocurrent is around a microamp, but this number can vary up or down by a few orders of magnitude depending on the details of your optics. This small current must be amplified to a level where it can be easily measured. The voltage measurement range of the data acquisition system is ±10 V. It makes sense to shoot for an output voltage that fills most of the range of the data acquisition system. The circuit shown to the right is a two-stage amplifier which converts the photodiode current to a voltage, and amplifies this voltage.

Before you build the circuit, you will need to choose values for the resistors and capacitors to get the right amount of gain and an appropriate cutoff frequency. The two stages of the amplifier should look familiar from your answers to the questions in Assignment 7, Part 1, where the current source has been replaced by the photodiode.

Start by ignoring the effects of the capacitor, and pick resistor values such that 1 μA current from your photodiode will produce ~10V signal at the final output of the circuit ($ V_2 $). Remember that it is best to put as much gain in early stages of a multi-stage amplifier as possible, but you don't want to go much higher than 106 per stage. Since you won’t know the exact current values from your photodiode until you build your system, you will start with these values and adjust them as necessary after you build it. 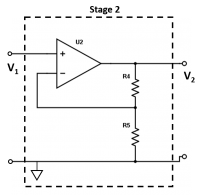 Next, reconsider the capacitor in Stage 1 of the amplifier circuit. What value capacitor will you choose to filter out both 60 Hz and 120 Hz noise from the lab?

If you have forgotten your way around the lab, consult the Lab orientation page.

Start by mounting all of the main structural components on an optical breadboard. Onward!

Mount the DNA melting chassis on an optical breadboard

The chassis includes a support bracket, fan, heat sink, and sample holder. There are two Peltier devices sandwiched between the holder and the heat sink. When current is applied to the Peltier device, the sample block will either heat up or cool down, depending on the direction of the current. There is a temperature sensor embedded inside the sample holder.

Wire the Peltier device and test it

Heating and cooling the sample with a Peltier device requires a lot of current. In this first iteration of the instrument, you will hook the Peltier device (also called a thermoelectric cooler, or TEC) directly to its own power supply. When you turn the power supply on, the sample will heat up. After you turn the supply off, the sample will return to room temperature by radiation, conduction, and convection — all that heat stuff. This is a pretty crude way to control the sample temperature. We'll come up with something better as we progress through this lab. 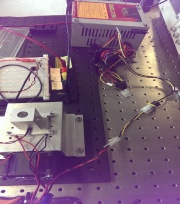 A platinum RTD is embedded inside the heating block. The resistance of the RTD varies with temperature according to the equation RRTD=1000 Ω + 3.85 θ, where θ is the temperature of the RTD in degrees Celsius.

Excite the sample with blue light

The circuit for illuminating the sample is pretty simple — just a blue LED in series with a resistor, powered by the 15 V supply. The circuit is shown in Figure 1. In this connection, the LED will shine with a roughly constant intensity. This part of the circuit will more complicated later in the lab. For this first iteration of the instrument, a constant, blue light source will do the trick.

Light coming out of the LED diverges pretty quickly. You might be able to get more light to fall on the sample with a lens.

You will use a photodiode, a transimpedance amplifier, an emission filter, and possibly some lenses to detect fluorescent light from the sample. It's time to put all of that together. Start by building the optical system. Then build and test the amplifier.

It's time to build the transimpedance amplifier that will convert the tiny current produced by the photodiode into a measurable voltage. If you didn't already select component values, you are probably not very good at following directions. Pick component values before you start building.

Connect your instrument to the computer data acquisition system

Each lab PC is equipped with a National Instruments USB-6212 or USB-6341 data acquisition (DAQ) card.

The USB-6212[1] has 16, 16-bit analog input channels which can, in sum total, accomplish 400 thousand samples per second (400kS/s). That is, if there are two channels, each one will be alternately sampled, and EACH sampled at 200kS/s. A multiplexer sequentially selects from among the 16 single-ended and 8 differential input signals. The card also supports two 16 bit analog output channels with an update rate of 250 kS/s and an output range of +/-10 V and up to +/-2 mA.

The USB-6212 also has 32 digital input/output channels and a digital ground. A 50 kΩ pull-down resistor is typically used in series with connections to these channels.

The USB-6341[2] is s little more powerful. It has 16, 16-bit analog input channels which can, in sum total, accomplish 500 thousand samples per second (500kS/s). Again, a multiplexer sequentially selects from among the 16 single-ended and 8 differential input signals. The card also supports two 16 bit analog output channels but they have an update rate of 900 kS/s and an output range of +/-10 V and up to +/-2 mA.

Finally, the USB-6341 has 24 digital input/output channels and a digital ground, as well as 4, 100 MHz counter/timers.

A special connector has been prepared for you, connected as shown below. Connect the appropriate wires from the DAC across the RTD and photodiode amplifier circuit. The rest of the cables will only be used in the next part of the lab. The connections and cable wire colors are also summarized in a memo.

Run BasicMelter in MATLAB to collect data from your instrument.

Use the "Open file ..." button to write the data to a file. The data will be tab-delimited and can be read into Matlab with the load command.

If you need to debug the DAQ (skip otherwise!)

(Many more can be found online or on the course share)