In this module you will engineer the metabolism of E. coli in an attempt to increase the production of a commercially relevant product. Specifically, use will use metabolic engineering to increase either the ethanol yield or acetate yield via manipulating the fermentation pathway native to E. coli cells using CRIPSRi.

Ethanol, or ethyl alcohol, is used as fuel – most commonly as a biofuel additive in gasoline. Current methods for producing ethanol involve the use of agricultural feedstocks and concern is mounting given the effect this may have on food prices and resources. Using E. coli as an ethanol-generating machine is promising; however, the ethanol output of a native cell is very low.

Acetate is a salt combined that results from the combination of acetic acid with an alkaline, earthy, or metallic base. The majority of the 5 billion kilograms of acetic acid produced each year by industry are used to produce acetates, which are then used in the production of polymers. As with ethanol, the use of E. coli to generate lactate is of interest, but the amount produced by a native cell is low.

Metabolic engineering refers to the alteration of genetic and/or regulatory circuitry within organisms. The native circuitry involves a series of enzymes that perform biochemical reactions that function to convert raw substrates into products that are required for the organism’s survival. When this native circuitry is altered using metabolic engineering techniques, the goal is to use the host organisms as machines that produce valuable materials in large quantities and at low cost. 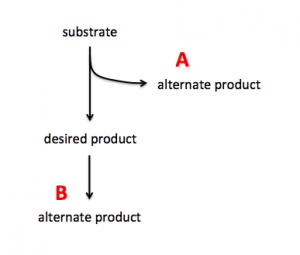 To engineer the metabolism of E. coli, you will use the CRISPRi system. Unlike more commonly used CRISPR-based technologies, CRISPRi is used to modulate expression from the genome rather than to modify the genome. This distinction is due to the use of an enzymatically-inactive dCas9 (or ‘dead’ Cas9) protein. Because dCas9 is enzymatically inactive, it is unable to cleave the DNA upon binding to the targeted sequence in the host genome. The lack of DNA cleavage results in gene silencing through impeding RNA polymerase binding, transcription factor binding, and/or transcription elongation. This method of repression referred to as CRISPRi collision and depicted in the schematic below.

For the digests that were prepared in the previous laboratory session, a 1% agarose gel with SYBR Safe DNA stain was used to separate the DNA fragments in the four digest reactions. In addition, a well was loaded with a molecular weight marker (also called a DNA ladder) to determine the size of the fragments.

Across many fields of science, E. coli is a valuable tool in research related to genetic systems, metabolic pathways, and physiological responses. It is often called the 'workhorse' of bench science. There are many reasons for this role including: 1) E. coli cultures are easy to grow in the laboratory, 2) E. coli is a genetically tractable system, 3) E. coli metabolic pathways are defined and, 4) the breadth of research available for E. coli in literature. For all of these reasons, E. coli is ideal for use this module!

We will take advantage of the genetic tools available for engineering the genetics of E. coli to increase ethanol or acetate yield. In E. coli, these products are produced via the mixed-acid pathway which is used by cells under fermentative conditions to maintain redox balance. With your laboratory partner, review the metabolic pathway map below. Specifically, identify at which step ethanol is produced. 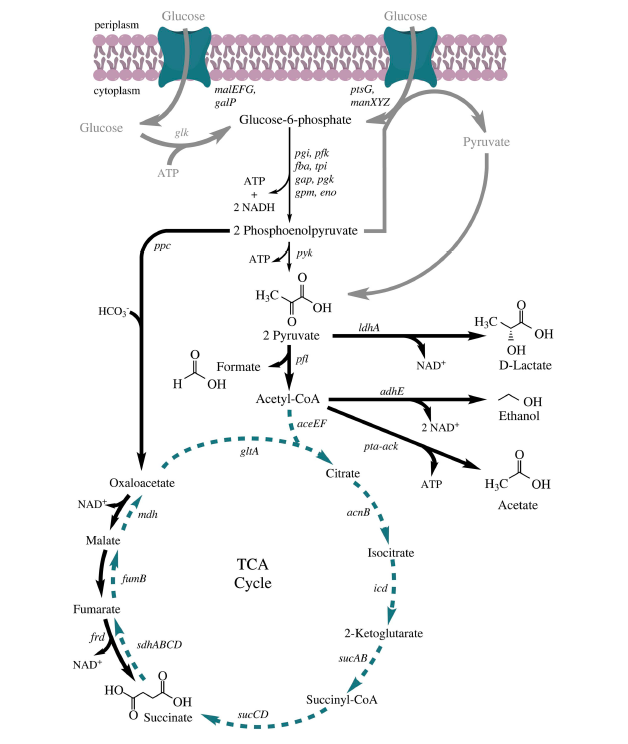 Review and discuss the Introduction and the first Results sub-section ('A minimal CRISPRi system consists of a single protein and RNA and can effectively silence transcription initiation and elongation') from the following journal article with your laboratory partner:

In this article, the researchers describe a modified CRISPR system, referred to as CRISPR interference (CRISPRi), that inhibits transcription of genes that are targeted using single guide RNA (sgRNA) molecules. The goal of this exercise is to understand how the sgRNA molecules are used to target specific genes. In the CRISPRi system, sgRNA forms a complex with dCas9 and this complex binds to the sequence in the genome that is complementary to the sgRNA molecule. Thus, the sgRNA targets a specific gene sequence in the host genome. When the sgRNA / dCas9 complex binds, transcription of the gene is inhibited.

Your main task for today is to use the insight from the above exercises to decide which gene you will target. Next, you will decide on the approach you will use to optimize ethanol / acetate yield! After choosing which byproduct you want to increase and which gene you think is the best target, consider specifics of your gRNA sequence. 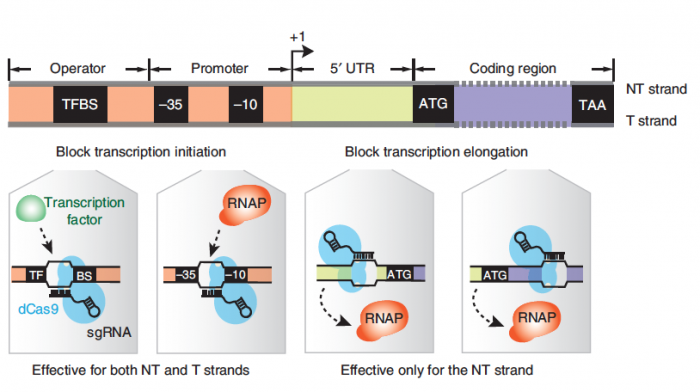