In the previous laboratory session, you examined the structural features of IPC. The goal of this was to consider which residues are important to affinity and / or cooperativity. Today you will consider the mutations that were generated in IPC by previous 109ers and review how IPC and the IPC variants were expressed and purified as this is the first step in testing how the variants perform as calcium sensors. 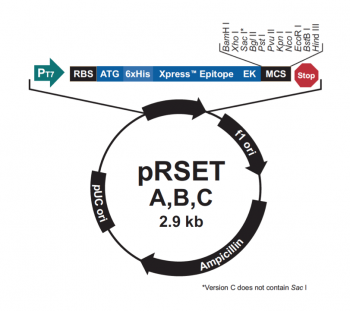 Schematic of pRSET expression plasmid. Modified from Invitrogen manual.
The genetic sequences that encode the IPC protein and IPC variant proteins are maintained within the pRSET expression vector (recall the cloning exercise from M3D1!). This expression vector contains several features that are important to the expression and purification of IPC and the IPC variants. To enable selection of bacterial cells that carry pRSET_IPC, an antibiotic cassette, specifically an ampicillin marker, is included on the vector. The features most relevant to protein expression and purification are highlighted in the schematic to the right. The T7 promoter drives expression of the gene that encodes IPC (or IPC variant). To ensure that the transcript is translated into a protein, a ribosome binding site (RBS) is included. The ATG sequence serves as the transcriptional start and the 6xHis represents the six-histidine residue tag that is used for protein purification via affinity chromatography.

There are some similarities between the expression system used to purify TDP43-RRM12 in Mod 2 and the system we will use for IPC. First, in both expression systems IPTG is used to induce protein production. As a review, IPTG is a lactose analog that induces expression by binding to the LacI repressor. When bound to IPTG, the LacI repressor is not able to bind to the lac operator sequence and transcription occurs unimpeded. For more details please review to the M2D1 Introduction! Another similarity is that a 6xHis tag is used and 6xHis-tagged IPC and IPC variants will purified using column affinity as shown in the image below.

Schematic of affinity separation process. For purification, agarose beads (yellow) are coated with nickel (green). When cell lysate is added to the nickel-coated agarose beads, His-tagged protein of interest (blue) adheres to the beads and other proteins in the lysate (orange) are washed from the beads.

In an effort to gain further insight into calcium affinity / cooperativity of the IPC calcium sensor, you will analyze the data generated from six Variant IPC proteins. The first step in this process is to identify the mutations that were incorporated into the Variant IPC sequences. To do this you will perform sequence alignments (just as you did on M1D5!). If you need a refresher, please watch the video tutorial for aligning sequence reads using SnapGene (linked here).

As mentioned above, IPTG is used to induce protein production in the expression systems for TDP43-RRM12 and IPC; however, the mechanism that drives transcription of the gene that encodes the protein of interest is different. For IPC and the IPC variants, the proteins are expressed using the BL21(DE3)pLysS strain of E. coli, which has the following genotype: F-, ompT hsdSB (rB- mB-) gal dcm (DE3) pLysS (CamR).

The expression vector, pRSET, encodes the bacteriophage T7 promoter, which is active only in the presence of T7 RNA polymerase (T7RNAP), an enzyme that therefore must be expressed by the bacterial strain used to make the protein of interest. In BL21(DE3), T7RNAP is associated with a lac construct. Constitutively expressed lac repressor (lacI gene) blocks expression from the lac promoter; thus, the polymerase will not be produced except in the presence of repressor-binding lactose or a small-molecule lactose analogue such as IPTG (isopropyl β-D-thiogalactoside). To reduce ‘leaky’ expression of the protein of interest (in our case, IPC), the pLysS version of BL21(DE3) contains T7 lysozyme, which inhibits basal transcription of T7RNAP. This gene is retained by chloramphenicol selection, while the pRSET plasmid itself (and thus IPC) is retained by ampicillin selection.

The pRSET_IPC and pRSET_IPC variants were transformed into chemically competent BL21(DE3)pLysS using heat shock as described previously. To review this method, look back at the information provided on M1D3! 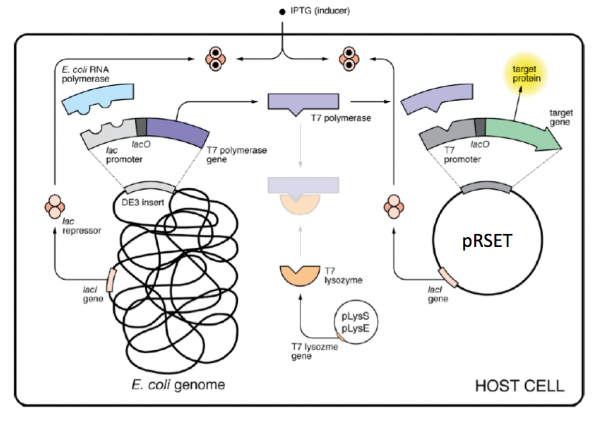 Using methods similar to what was discussed in Mod2, the gene encoding IPC was cloned into an expression vector. The expression vector was transformed into E. coli cells, then IPC expression was induced and purified. For a bit more detail on this, review the Introduction on this page. If you are curious about the similarities / differences between the experimental approaches used in Mod1 and Mod2, the Instructors can provide more detail.

To evaluate the purified IPC protein, we will use the same methods as when we assessed purified TDP43-RRM12: SDS-PAGE and microBCA (this is a variation of the BCA procedure that is used to measure lower protein concentrations). To review these methods, look back at the information provided on M2D2!

To get you started on your analysis, note that the expected molecular weight for inverse pericam is 47 kDa. Because our IPC protein contains a 3 kDa 6xHis tag, the expected size of purified WT IPC protein is 50 kDa. 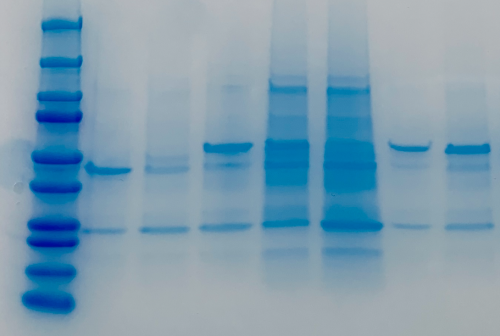 microBCA results to calculate concentration of IPC and IPC variants.

Next day: Evaluate effect of mutations on IPC variants