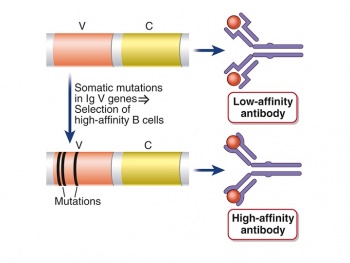 To engineer a protein-protein interaction (antibody-antigen), we will use a method called directed evolution. Directed evolution is defined as an iterative process of mutating a gene, then screening those mutants for a particular functionality, collecting the best mutants and repeating. It is a method that is inspired by the process of natural selection. Directed evolution is very similar to Affinity Maturation, the process that results in higher affinity antibodies in the human immune system. This process is outlined in the figure to the right.

In the Wittrup lab protocol, successive rounds of random mutagenesis of the scFv gene, followed by expression of the scFv on the surface of yeast then selection for "good binders" by fluorescence activated cell sorting is carried out. This process will produce an antibody fragment with increased affinity or stability to its antigen.

Today we will walk through the technical details of random DNA mutagenesis via error-prone PCR. This process creates a pool of scFv genes that have random mutations throughout the DNA sequence. This collection of varied scFV genes are called a library.

Finally, we will outline how one integrates this library into an expression vector, also referred to as the backbone, vector or plasmid, that can then be transformed into yeast and expressed on the surface of the cells. This method is called cloning. We will also introduce integral tools when cloning DNA plasmids: polymerase chain reactions (PCR) and restriction endonucleases (RE).

Motivation: To understand the important features of scFv yeast display it's important to know what genes are being utilized to control this system. 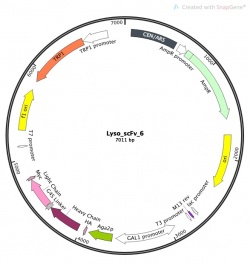 We will use SnapGene software for our DNA visualization and alignments. Feel free to use any software you are familiar with to carry out analysis. If you are off campus you must log into a VPN connection prior to opening the SnapGene application. Here is the link to the VPN download and installation instructions. You may need to update the MIT SnapGene license number if you have not opened the application recently. The new license information can be found here.

Motivation: To introduce random DNA mutations into our scFv clone we will carry out error-prone polymerase chain reaction (PCR). We will use special bases in the PCR reaction that mimic DNA damage and can erroneously pair with incorrect bases and will result in changes in the scFv DNA sequence. 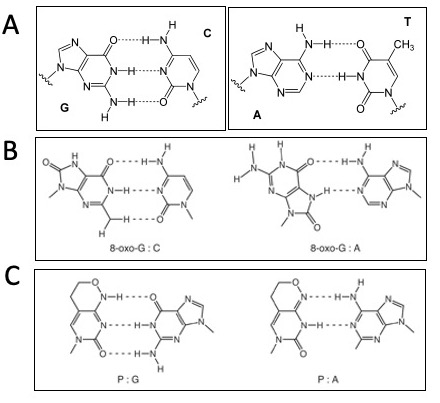 Potential base pairing with Normal and Mutant nucleotides.Chemical structure of DNA base pairs. Dashed line represent hydrogen bonds between nucleotides. (A)Normal bases guanine–cytosine (left) and adenine–thymine(right). (b) Mutant d8-oxo-G can pair with cytosine or adenine (c) Mutant dPTP can pair with guanine or adenine. Image adapted from Petrie KL, Deep sequencing analysis of mutations resulting from the incorporation of dNTP analogs.

PCR amplification The applications of PCR (polymerase chain reaction) are widespread, from forensics to molecular biology to evolution, but the goal of any PCR is the same: to generate many copies of DNA from a single or a few specific sequence(s) (called the “target” or “template”).

In addition to the target, PCR requires only three components: primers to bind sequence flanking the target, dNTPs to polymerize, and a heat-stable polymerase to carry out the synthesis reaction over and over and over. DNA polymerases require short initating pieces of DNA (or RNA) called primers in order to copy DNA. In PCR amplification, forward and reverse primers that target the non-coding and coding strands of DNA, respectively, are separated by a distance equal to the length of the DNA to be copied. PCR is a three-step process (denature, anneal, extend) and these steps are repeated. After 30 cycles of PCR, there could be as many as a billion copies of the original target sequence.

Based on the numerous applications of PCR, it may seem that the technique has been around forever. In fact it is just under 30 years old. In 1984, Kary Mullis described this technique for amplifying DNA of known or unknown sequence, realizing immediately the significance of his insight. "Dear Thor!," I exclaimed. I had solved the most annoying problems in DNA chemistry in a single lightening bolt. Abundance and distinction. With two oligonucleotides, DNA polymerase, and the four nucleosidetriphosphates I could make as much of a DNA sequence as I wanted and I could make it on a fragment of a specific size that I could distinguish easily. Somehow, I thought, it had to be an illusion. Otherwise it would change DNA chemistry forever. Otherwise it would make me famous. It was too easy. Someone else would have done it and I would surely have heard of it. We would be doing it all the time. What was I failing to see? "Jennifer, wake up. I've thought of something incredible." --Kary Mullis from his Nobel lecture; December 8, 1993

Please watch this animation of PCR created by LabXchange: [PCR Animation]This will help answer questions for your lab notebook.

Analysis of the error-prone PCR conditions described above (10 PCR cycles) has shown that one to nine amino acid mutations results per scFv gene. If desired, doubling the number of PCR cycles to 20 would result in three to fourteen mutations per scFv gene.

Motivation: To separate the PCR products from the template DNA we will use gel electrophoresis. We can use gel purification to exploit the difference in size between the DNA template and PCR product.

To purify the PCR mutant product from the parental template, a 1% agarose gel with SYBR Safe DNA stain was used to separate the DNA fragments. In addition, a well was loaded with a molecular weight marker (also called a DNA ladder) to determine the size of the fragments.

To ensure the steps included below are clear, please watch the video tutorial linked here: [DNA gel electrophoresis]. The steps are detailed below so you can follow along!

Motivation: To transform the mutated scFv products and the plasmid backbone in yeast we must carry out two additional steps. First we will amplify the PCR products so there is a sufficient amount of DNA for transformation and second we will digest the backbone plasmid so the new mutated scFv genes can integrate into the plasmid. 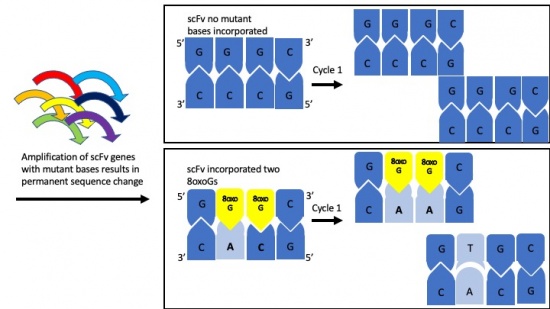 Amplification of mutant scFv genesThis schematic illustrates, in the top panel, a four base pair sequence with no mutant bases incorporated, resulting in amplification of the same sequence during PCR. The lower panel illustrates the sequence if two 8-oxo-G bases were incorporated. This is one example of how mispairing can result in sequence change during subsequent rounds of PCR amplification. Dark blue=base same as parental sequence, light blue=base changed from parental sequence, yellow=mutant base 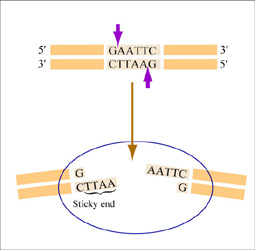 You can download the pCTCON2 backbone, or vector, plasmid here

Motivation: To express the new scFv library we must transform the PCR product and digested backbone DNA into the yeast cells and select for re-circularized plasmid DNA.

We will use a transformation procedure called electroporation to get the DNA inside yeast cells. During this procedure yeast, specialized salt buffers, and DNA are loaded into a metal cuvette and a high voltage electrical pulse is used to open pores within the cell membrane. DNA is taken into the yeast cells and the pores close within minutes as the cells recover in full nutrient media.