In the previous laboratory session, we researched how to best target a gene using the CRISPRi system. The goal for today is to review the strategy used in constructing an expression plasmid that encodes the sgRNA_target. This will allow for transcription of the sgRNA_target molecule and ultimately provides the specificity needed to target dCas9 to a gene of interest. The strategy used in constructing the psgRNA_target plasmid involved two common methods: primer design and polymerase chain reaction.

The applications of PCR are widespread, from forensics to molecular biology to evolution, but the goal of any PCR is the same: to generate many copies of DNA from a single or a few specific sequence(s) (called the “template”). In addition to the template, PCR requires only three components: primers to bind sequence flanking the target, dNTPs to polymerize, and a heat-stable polymerase to catalyze the synthesis reaction over and over and over. DNA polymerases require short initiating pieces of DNA called primers to copy DNA. In PCR amplification, forward and reverse primers that target the non-coding and coding strands of DNA, respectively, are separated by a distance equal to the length of the DNA to be copied. To amplify DNA, the original DNA segment, or template DNA, is denatured using heat. This separates the strands and allows the primers to anneal to the template. Then polymerase extends from the primer to copy the template DNA. How many cycles of PCR are required to achieve the desired double-stranded amplification product?

Several features are important to consider when designing primers for PCR. Primers that are too short may lack requisite specificity for the desired sequence, and thus amplify an unrelated sequence. The longer a primer is, the more favorable are its energetics for annealing to the template DNA, due to increased hydrogen bonding. On the other hand, longer primers are more likely to form secondary structures such as hairpins, leading to inefficient template priming. Two other important features are G/C content and placement. Having a G or C base at the end of each primer increases priming efficiency, due to the greater energy of a GC pair compared to an AT pair. The latter decrease the stability of the primer-template complex. Overall G/C content should ideally be 50 +/- 10%, because long stretches of G/C or A/T bases are both difficult to copy. The G/C content also affects the melting temperature. PCR is a three-step process (denature, anneal, extend) and these steps are repeated 20 or more times. After 30 cycles of PCR, there could be as many as a billion copies of the original template sequence.

Our communication instructors, Dr. Prerna Bhargava and Dr. Sean Clarke, will join us today for a discussion on preparing a Research proposal presentation.

In this exercise, you will explore the features present in the plasmid that are necessary to express the sgRNA_target sequence (see plasmid map below). 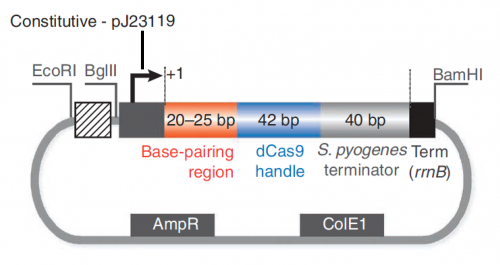 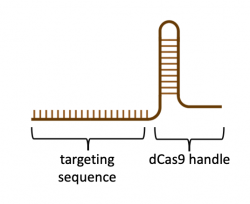 In the previous laboratory session you learned how to best target genes of interest by designing sgRNA sequences that bind within the host genome. The sgRNA sequence is what enables the CRISPRi system to specifically target the promoter or coding region of a gene, and thereby regulate gene expression. Thus far, we have described the sgRNA as only containing sequence complementary to the targeted gene in the genome, but this is only half of the full sgRNA used in CRISPR-based technologies. The second half of the sgRNA is a 'handle' that binds dCas9 (or Cas9 in the native CRISPR system). As shown in the image to the right, the targeting sequence and the dCas9 handle together compose the sgRNA. To synthesize the full sgRNA, the basepair sequence was submitted to IDT-DNA, a commercial company that specializes in DNA synthesis chemistry. To generate the full sgRNA, the basepair sequences for the targeting sequence and the dCas9 handle were simply submitted as a single DNA strand.

Before we continue, we should review the process used to generate actual primers that can be used to amplify DNA. Current oligonucleotide, or primer, synthesis uses phosphoramidite monomers, which are simply nucleotides with protection groups added. The protection groups prevent side reactions and promote the formation of the correct DNA product. The DNA product synthesis starts with the 3'-most nucleotide and cycles through four steps: deprotection, coupling, capping, and stabilization. First, deprotection removes the protection groups. Second, during coupling the 5' to 3' linkage is generated with the incoming nucleotide. Next, a capping reaction is completed to prevent uncoupled nucleotides from forming unwanted byproducts. Lastly, stabilization is achieved through an oxidation reaction that makes the phosphate group pentavalent. For a more detailed description of this process, read this article from IDT DNA.

Image modified from Larson et. al. Nature. (2013) 8:2180-2196.
As shown in the figure to the right, the steps used to insert the sgRNA_target sequence into the expression vector are based on the principles of PCR. The expression plasmid is the template in this amplification reaction. For amplification to occur, a forward primer and a reverse primer are required. In this reaction, the forward primer (labeled Primer Ec-F in the figure) is the full sgRNA_target that consists of the targeting sequence and the dCas9 handle. The dCas9 handle part of the primer anneals to the complementary sequence in the expression plasmid. The targeting sequence does not anneal to the expression plasmid, instead this part of the primer is incorporated into the amplification product during PCR. The reverse primer (labeled Primer Ec-R in the figure) anneals to a complementary sequence in the expression plasmid and reads away from the forward primer. The product from each of these primers is a single-stranded DNA molecule. Because these single-stranded products are complementary, the strands will anneal and form a double-stranded product. 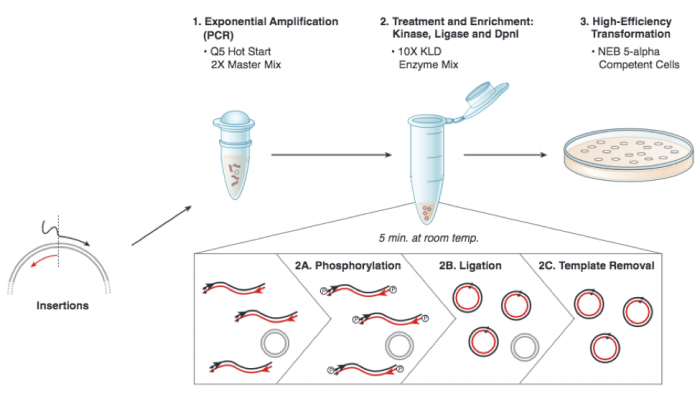 The sgRNA_target sequence that was inserted into the expression plasmid was confirmed using DNA sequencing. The invention of automated sequencing machines has made sequence determination a relatively fast and inexpensive process. The method for sequencing DNA is not new but automation of the process is recent, developed in conjunction with the massive genome sequencing efforts of the 1990s and 2000s. At the heart of sequencing reactions is chemistry worked out by Fred Sanger in the 1970s which uses dideoxynucleotides, or chain-terminating bases. These chain-terminating bases can be added to a growing chain of DNA but cannot be further extended. Performing four reactions, each with a different chain-terminating base, generates fragments of different lengths ending at G, A, T, or C. The fragments, once separated by size, reflect the DNA sequence due to the presence of fluorescent dyes, one color linked to each dideoxy-base. The four colored fragments can be passed through capillaries to a computer that can read the output and trace the color intensities detected.

To ensure that you understand the principles of using sgRNA to target a gene of interest, complete the sgRNA Design Worksheet with your laboratory partner (linked here). It may be helpful to review the work you completed in Part 2 of the previous laboratory session.

In your laboratory notebook, attach the completed sgRNA Design Worksheet.

Next, you will use your knowledge of primer design to align the sgRNA_target sequences that were designed by former 109ers to the targeted genes in the MG1655 genome. Recall that your goal in this module is to optimize the CRISPRi system by building on the data collected by students in previous semesters. The first step in achieving this goal is mining the data that exist! The sgRNA_target sequences that you will assess are included in the table below: