The goal of this module is to test the hypothesis that exposure to As inhibits the repair of H2O2-induced DNA damage in an effort to address potential public health risks associated with combined exposures to hazardous compounds. Before we discuss the specific experiments, let's review the important background information.

Normal cell tissues have a basal level of DNA damage due to cell processes involved in cellular metabolism. For example, electrons can escape the electron transport chain and result in the formation of superoxide. Furthermore, defense mechanisms employed to protect the host from bacterial infection involved the release of reactive oxygen species. These reactive oxygen species are implicated in causing more than 20 types of DNA base lesions. One of the most common types of damage is the change of guanine to 8-hydroxyguanine.

Base excision repair (BER) pathway repairs damaged bases
The Base Excision Repair (BER) pathway corrects DNA damage, specifically the removal of small, non-helix distorting lesions in DNA caused by damaged bases. These lesions often result from oxidation, alkylation, deamination, and depuriniation/depryrimidination. If base lesions are not repaired, non-canonical base pairing can occur, which may result in the incorporation of an incorrect base during replication. To prevent mutations and maintain integrity of the genome, the BER pathway evolved as a highly conserved repair mechanism in both E. coli and mammals. Thus, this pathway is responsible for repairing damage before a mutation results.

The core BER pathway includes only four proteins that function to remove the damaged base and replace it with the correct base. First, a DNA glycosylase recognizes that a damaged base is present in the DNA and cleaves an N-glycosidic bond, which creates an apurinic or apyrimidinic site (referred to as an AP site in both cases). Different DNA glycosylases recognize different types of base lesions. Second, the DNA backbone is cleaved to create a single-strand DNA nick by either a DNA AP endonuclease or a DNA AP lyase. Next, a DNA polymerase incorporates the correct base using the sister strand as a template. Last, a DNA ligase completes the repair by sealing the single-strand nick, which restores integrity to the helix. For a more detailed description of the BER pathway, read this review by Robertson et al.

Arsenite (As) inhibits ligase activity
As mentioned above, the final step in BER is a ligation reaction that seals the helix. Arsenite has been shown to enhance the genotoxicity of several mutagens and inhibit ligase activity. Thus, the experiments in this module are designed to test the combined effects of exposure to H2O2, a DNA damaging agent, and As, a chemical known to decrease DNA repair capacity by inhibiting strand ligation.

We will test the hypothesis for this module using two experiments: the γH2AX assay and the CometChip assay. Today we will start the γH2AX experiment. In eukaryotes, including humans, DNA is tightly wound around histone groups. H2AX is a member of the core group of histones that contributes to nucleosome formation and DNA structure. When a DNA double-strand break is introduced into the genome, the H2AX histones near the break are phosphorylated by the ATM kinase at residue Ser-139. Upon phosphorylation H2AX is referred to as gamma-H2AX. Given that only H2AX histones near the site of DNA damage are phosphorylated, γH2AX is a useful target when determining the abundance and location of double-strand breaks. It is important to highlight that the DNA damage expected to occur in response to H2O2 treatment is single-stranded breaks. So why are we using the γH2AX assay to measure double-stranded breaks? When DNA is damaged by multiple single-stranded breaks, double-stranded breaks can occur.

H2AX is phosphorylated in response to DNA double-strand breaks.

Part 1: Define treatment conditions that will be used for γH2AX experiment

The plate you seeded during the previous laboratory session will be used to treat cells using the As and H2O2 conditions detailed below.

Before you complete the protocols for the As and H2O2 treatments, it is important to consider what conditions will be assessed in this experiment and how the experiment was designed. For the experimental question, the goal was to measure DNA damage in cells that were first exposed to As and then treated with H2O2. Given this information regarding the design of the experiment, make a list of all of the conditions that were tested with your laboratory partner. Use the following descriptions of the variables that are included in this experiment to assist you.

Expose cells to As 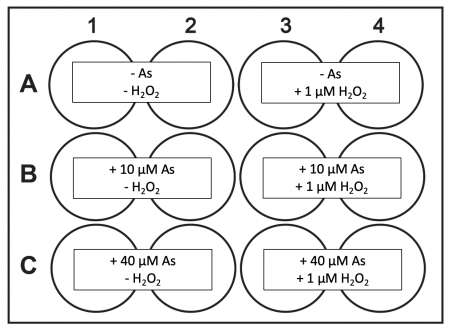 Next day: Use immunoflourescence staining to assess γH2AX experiment